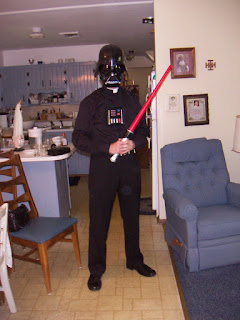 May the Force be with you!
Darth Dylan
Posted by Fr. Dylan James, Catholic Priest, dual American-British citizen at 12:02

Mmmm...
You could check out
http://entertainment.howstuffworks.com/lightsaber.htm

Or, to find out why Sith use red sabers
http://entertainment.howstuffworks.com/sith.htm

But surely it would be better to use your saber in Her service than to have one of Her colour?

OI!
VA, love you as I do, but if you steal Fr. Dylan from me I shall be less than pleased. You're already automatically in his good books (you don't want to know how often he's tried to get me there). Snitch him and I'll..I'll...think of something.

PP, do the good books refer to my future plans or my current subject of study? (This is the point where I calmly roll out my "Physics is, unfortunately for our good friends of other subjects, the BEST"-banner.)

And yes, yes, you saw him first.

The best thing would be, of course, to fight in Our Lady's service, with Her colour :D

@VA: oh no, when it comes to undergraduate degrees, he's MINE and there's no way you'll get him. Although I fear that he did have more of an interest in "dynamics" than is really healthy....

His good books are about your future plans. They're all great chums - one of them went to speak at a Faith Conference I was at once. And his description of them to me: "Sound as a pound."

I may remind you that I'm also the only one of us who's allowed to tease him about where he was born. Or his accent :P

And the only one who has ever met him. I think your affections are quite safe :)

What books are you two referring to?
My books?

Father, Livi is afraid you don't like her anymore because she blatantly refuses to become a Dominican Sister of St. Joseph. Thus, she would be out of your "good books", and for the same reason, I'd be in them.

My only excuse for the rude way in which we took over your com box is that in real life we are much worse... :(

Ah, those are the "good books". Actually, re-reading, that is clear!

My memory is that Levi was supposed to become a Benedictine nun at an abbey that has now shut up house and moved because they lacked her. I blame here for that, not for not joining the Dominicans!

I'm not sure if they wouldn't have moved had she joined... you can put a white veil on a force of nature, but you'd still require solid foundations and well-isolated walls. They might have been forced to renovate before she got to Solemn Vows.

Zusje, I'm beginning to think that we simply need to go and visit Fr. Dylan together.

I'm trying to find solace in the fact that I was the 16-year-old bane of his life for a whole year. And no-one else was!! *sniff*

Well, I'll be in Merry Mother England next week, want to come with?

And, er, are you sure you want to subject him to both of us? Maybe you should lock me up in the kitchen. After all, you're Mary, I'm Martha.

I'd love to, but I have the undergraduates to deal with. I might go over whilst I'm in MME though. I wonder how one gets to Shaftsbury....

Horse, cart, and armed escort. Oh wait, that was Shrewsbury!

Darth Father, are you coming to preach at our Boot Camp?

It doesn't have to be in Dutch.