The Baptism of the Lord, Year C, Shaftesbury 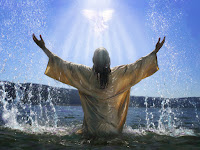 First, today's feast is a continuation of the Epiphany. The word "epiphany" means "manifestation": a showing of the baby Jesus to the wise men who came from the East, a showing of the Jewish Messiah to the Gentile nations who had come to worship Him. The feast of the Baptism of the Lord continues this showing by the fact that the voice spoke from heaven at His baptism and publicly declared who He was (and is): “You are my Son, the Beloved”. So today is another epiphany, and it is part of the threefold epiphany that will conclude next week when the gospel for year C maintains the ancient tradition of concluding this epiphany with the showing of Jesus in His first miracle of the marriage feast of Cana, where He changed water to wine (Jn 2:1-11).

But there is a second reason why today's feast belongs in Christmastide, and it's a more subtle reason: His baptism in the River Jordan was another type of birth, a sort of sacramental birth that followed on from His physical birth that was celebrated on Christmas Day. (In saying I follow the Church in drawing on the ancient sermon of St Maximus of Turin, Office of readings for 11th January, between the Epiphany and the Baptism of the Lord).

At Christmas He was born of a virgin, at His baptism He was ‘generated’ (St Maximus) in the water. In Bethlehem His Blessed Mother presented Him to the Magi, that the Magi might adore Him; in the River Jordan the voice of the Father spoke from heaven and presented His Son to the world, that the world might adore Him. At His physical birth the Virgin Mary embraced Him with a mother's love, in the River Jordan God the Father embraced Him with a fatherly love.

But there is another truth that connects these two mysteries, and that is the fact that Jesus did not do either of these things for Himself, rather, He did them for us. Did the Divine Son of the Father need to leave heaven and be born of a virgin? Not for His sake, only for ours. Did the Incarnate Son need to be purified, reborn in the waters of the River Jordan? Not for His sake (he was sinless), only for ours.

Today, therefore, might be seen as a celebration of OUR birthday, our sacramental birthday. In our Christian re-birth we die and rise with Christ, but the means by which we do this is the sacrament of baptism, the sacrament that Christ established by sending out His apostles at the end of the Gospel to baptise “the nations”(Mt 28:19), but that He first made possible by being baptised Himself -that our Baptism might be a union with Him and to Him. That is why it is in Christmastime, in the season of His physical birth, that we celebrate what was both His and our sacramental re-birth.
Posted by Fr. Dylan James, Catholic Priest, dual American-British citizen at 00:03