On Unity and the Mass, 3rd Sunday in Ordinary Time, Shaftesbury 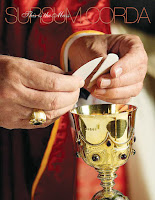 Today we are halfway through the week of prayer for Christian Unity, and in our second reading we just heard that famous appeal for unity that was made by St Paul (1 Cor 1:10-13.17). And I would like to say a few words today about a couple things that non-Catholic Christians take issue with in our Catholic practice, 2 inter-related things: the centrality of the Mass, and our refusal to practice inter-communion with non-Catholics. Both of these things concern the vision of unity that Catholics aspire to. And while it might seem somewhat pointed to refer to what divides us while we are praying for unity nonetheless we can only aspire to TRUE unity if we face the truth, including the truths that divide us -and these are the truths that people see and question precisely on a day like today.

Concerning the first point, the centrality of the Mass, while we are gathered here today for Mass, all the other Christians in Shaftesbury have cancelled the services they normally have in their own churches and are meeting together for a united service. Many of them, perhaps unsurprisingly, take umbrage with the fact that we Catholics won’t cancel Mass and join them -and I want to articulate at least part of the reason why this is the case. While the reason has many levels profundity to it, it is not a complicated reason:

We Catholics celebrate Mass each and every Sunday, we Catholics hold that each and every Catholic is morally obliged to attend Mass each and every Sunday, because we hold that the Mass is not just one prayer among many but is rather THE defining prayer for Christians, THE prayer that we should offer the Lord to observe the 3rd Commandment and keep the Lord’s Day holy. It was this prayer about which Jesus said, “Do THIS in memory of me”(Lk 22:19). It was this prayer that the early Christians, from the very beginning of the Church, gathered to celebrate every week. And it is a simple historical fact that it was the unanimous and continual practice of all Christians from the beginning of the Church right up until the Protestant Reformation to gather to celebrate the Eucharist every Sunday.

Now, at the Protestant Reformation those who became Protestant claimed that the Christians who had gone before them, i.e. the Catholics, had got it wrong. Classical Protestantism denied that the sacraments were instituted by Jesus Christ [denied this is the sense that they no longer understood either the nature of the sacraments, the number of them, or the significance and meaning of their institution in the manner that Catholics did and do acknowledge them], denied that the Eucharist is truly the Body and Blood of the Lord, and similarly most Protestants denied that the Eucharist needs to be THE prayer that Christians celebrated every Sunday. So, it is hardly surprising that so many non-Catholic Christians today should be happy to cancel their normal Sunday service and meet together to celebrate something that is not the Eucharist. But, for them to expect us to join them would be, in effect, for them to expect us to become Protestant -and I think very few of them realise that that is what is implicit in their call for us to cancel Sunday Mass.

But, more briefly, there is a second point that non-Catholic Christians take umbrage with: Why is it that Catholics will not allow non-Catholics to receive Holy Communion at a Catholic Mass, and why is it that Catholics will not receive Communion at a non-Catholic Eucharistic service? In brief, the reason for this is that receiving Communion implies being in communion, being in unity, being in that unity that St Paul spoke about in our second reading: United in "belief and practice"(1 Cor 1:10). Sadly, Christians today are not united in belief and practice. Concerning the Mass itself, Catholics recognise the truth of what Jesus said about the Eucharist, namely that it is His Body and His Blood, while most non-Catholics say that this is just symbolic. And how could it make sense to share in Communion if we do not share a common faith in what Communion is? Further, even among those who recognise the truth of the Real Presence, sharing Holy Communion needs to also involve sharing the common life of the Church in the sense of recognising the common authority that holds that community in being, namely the Pope as the Vicar of Christ. To seek to be in communion with Christ but not be in communion with the Church that is His body would bring a contradiction into receiving Holy Communion. That, briefly summarised, is why Catholics don't practice inter-communion with non-Catholic Christians.

To come back to where I began, all of this may seem odd to talk about and we are praying for unity. And yet it is precisely when we remember to pray for unity that we remember what it is that divides us. And, as Catholics we have to say that these things are not small differences but very big ones, ones that go to the heart of the question of what true unity, true communion is about: true communion brings us to the Mass, flows from the Mass, and has to involve a shared belief in what the Mass is about.
Posted by Fr. Dylan James, Catholic Priest, dual American-British citizen at 00:08