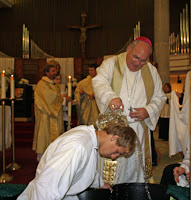 Tonight we have someone, Catherine, being baptised. Which means that it’s a useful time to reflect on the significance of being baptised, and on baptism’s connection with the death and resurrection of Jesus.
I want, in particular, to suggest that we each consider a particular question: what difference does being baptised make to how you attempt to live? Or, do you live as if you hadn’t been baptised?

For example, to return to the “new commandment” I preached about on Thursday night, do you attempt to live that commandment (to love) by your own power, or, by the power of Jesus in you?
Because, if you’re just trying to do it by your own power then you’re acting as if you hadn’t been baptised.

Baptism gives us a new power but it’s a power we can ignore, or, a power we can habitually use.
Baptism gives us a power that those who are not baptised do not have.
Of course, the Church teaches that God gives His grace even outside the Church, as an old priest I knew used to put it, “God is not a snob”. But, nonetheless, His grace is particularly effective in those incorporated into Him in Baptism, incorporated into His death, and resurrection, and the pouring of the Holy Spirit –because this is what baptism is all about.

Baptism, of course, is an event of such colossal and fundamental significance in the Christian life that there is not just one but a great many different, interrelated, truths that are contained within it. That's why we have a whole plethora of different symbols in tonight's baptismal liturgy. But rather than attempt to explain all the symbols tonight I want to point to what connects the two most fundamental realities that underlie them: purification from sins and the new birth in the Holy Spirit (Catechism 1262).
These two things, however, are meaningless without each other: the washing of water would have no supernatural effect if it was not for the Holy Spirit; and the Holy Spirit can hardly come in us unless that dwelling within us involves u changing from our present state of sin to being something that is worthy of being a Temple for Him to dwell within.

Baptism washes us clean of sin; it involves a commitment to renounce sin, with a profession of faith in the One who claims the power to forgive sins.
Baptism brings new life, but the new life that Jesus promised, the new life that His Spirit brings, this new life involves such a drastic change within us that it must involve a death within us. As St Paul classically put it: the Old Man Adam must die that the New Man Christ may live (c.f. Rom 5:12; 6:4).

And we pass from death to life, we are incorporated into Christ, not by our own power but by the power of His Holy Spirit, poured into our hearts, poured into our hearts in baptism.
The relationship between the Holy Spirit and baptism was first most publicly manifested in the baptism of our Lord Himself, when as He came up from the waters the heavens opened and the Holy Spirit descended upon Him in the form of a dove.

To return to where I began, what does this mean for those of us who have already been baptised, as well as for Catherine who is about to be baptised? It means that we have a new power dwelling within us. A new power that we can, inasmuch that we open ourselves to avail of it, a new power that can make us a new creature that is able to do we cannot do alone: a new power that even means we can keep the "new commandment" to love as He first loved us.
Posted by Fr. Dylan James, Catholic Priest, dual American-British citizen at 21:00