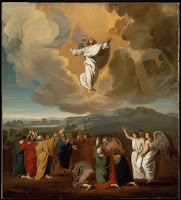 I want to illustrate the question of what we should be hoping for, by indicating not what the early Christians hoped for, but what the Jews hoped for –which is the same thing as what the disciples of Jesus hoped for BEFORE they understood what Jesus was teaching them. And I want to make this point by referring to the issue of the “kingdom”.

The disciples of Jesus, when they first began to follow Jesus, had this same expectation and the same hope of what "the kingdom" was about.
It seems that all through the time when Jesus walked among them and taught them they still maintained this very political hope of a restored "kingdom". And so it is that we heard them ask, before the very moment that He ascended up to heaven, "Lord, has the time come? Are you going to restore the kingdom to Israel?"(Acts 1:6).

What happened at that Ascension radically changed what it was they hoped for, and radically changed their whole notion of what "the kingdom" was about. Their hope became a hope of heaven rather than a hope merely for a restored political kingdom on earth.
We can see an indication of this in something as simple as the number of times that the word "kingdom" is used in the Bible:
Before the Ascension, Jesus uses the word "kingdom" 105 times in the Gospels (according to my word count using www.biblegateway.com, excluding 14 uses of the word in other contexts http://www.biblegateway.com/keyword/?search=kingdom&searchtype=all&version1=31&bookset=4).
After the Ascension, the later books of the new Testament use the word "kingdom" only 32 times (excluding 4 uses of the word in other contexts http://www.biblegateway.com/keyword/?search=kingdom&version1=31&searchtype=all&spanbegin=51&spanend=73).

That word count indicates SOMETHING of the shift in understanding that occurred, but the word count alone fails to reveal the even deeper shift in the meaning and interpretation that was put on the concept of "kingdom":
"the kingdom" that they hoped for was no longer a restored political empire but “the kingdom of heaven”. And, once they understood this central truth that Jesus had spent so long trying to explain to them, the language and metaphor of "kingdom" became much less significant, and so they used the word "kingdom" much less.

Now, very simply, for ourselves, we need to be sure that our hopes are likewise affected by today's feast of the Ascension. Jesus has been taken up into “glory” and this is the same "rich glory He has promised the saints will inherit"(Eph 1:18). And everything else that I hope for as I live in this passing world needs to be a hope that is relative to that true hope of heaven. Where He has gone, we hope to follow.
Posted by Fr. Dylan James, Catholic Priest, dual American-British citizen at 00:21