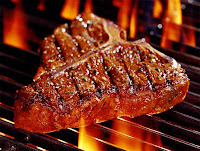 Mt 16:21-27
I eat almost any and all food, but there are a few things I don’t like: I don’t like lentils, I don’t like chick peas, and I don’t really think it’s fair to call to tofu ‘food’ at all! However, I’m doing to be eating a more of these in the future, eating them as Friday penance, and I want to say a few words to you today about the new law on Friday abstinence from meat.

As many of you will have heard in the media reports earlier this year, and in the parish newsletter, on May 14th of this year the Bishops of England and Wales announced that they are re-establishing the requirement for Catholics in this country to abstain from meat on Fridays, a law which comes into effect on Friday 16th Sept. Some of you many not welcome this news, but I think it’s a good think, and whether or not we think it’s a good thing it will DO us good.

‘Friday abstinence’, i.e. not eating meat on Fridays, is a small way of doing penance, a small way of ‘carrying our cross’. As we heard Jesus say in today’s gospel: every Christian has to follow our Lord in carrying the cross. For Jesus, the road to the Resurrection, the road to new life, the road to heaven, went though the road to the Cross. For His followers, for us, it’s the same: we can only be born to new life if the old life dies within us, is crucified in us, and that means voluntarily carrying our cross. We do this in a special way in Lent when we ‘give things up’, and we’re called on to do this every Friday, the day Jesus died, to carry that Lenten spirit and Lenten benefit into the whole year.

But, you might be wondering, why this new law? Surely, some might be thinking, didn’t we do away with that after Vatican II? Well, there was a profound mistake that many of us made, a mistake that I grew up with as a child thinking: After Vatican II, the bishops of England and Wales decided to replace the law requiring everyone to abstain from meat on Fridays by instead encouraging us all to choose a different penance for each us. Most of us, however, thought this meant that Friday penance was dropped altogether –which isn’t what was intended.

So, our bishops are re-introducing the requirement to abstain from meat on Fridays, with 3 intentions. First, the general intention to re-emphasise, in general, the need for us to do penance on Friday. In this respect, let me point out that there are many other small penances that we might add to not eating meat, like not having chocolate –and let me also point out that not eating meat doesn’t mean you have to eat fish -you might eat only vegetables, or even that tasty tofu and lentils!
Second, our bishops have said that by all, together, doing the same penance of not eating meat, this will help bond us better together in a common Catholic ‘identity’ –something that many people have said we’ve lost in recent decades. And third, this common identity will enable us to give a better ‘witness’ in our world –in a world that is over materialistic, over-fed, and not self-restrained, Friday abstinence witnesses to self-restraint and the existence of values higher than food or self-indulgence.

I’d also like to point out to you what this will mean in practice: it will mean a new way of planning our eating, like planning to have non-meat food in the house for Fridays. Also, if you’re being invited to a friend’s house for dinner on a Friday you’ll have to say that you can’t eat meat –which is something that vegetarians have to say all the time. Similarly, at things like public buffets we’ll find ourselves being the ones not eating the meat dishes.

Finally, I want to say a word about why the Bishops have a right to require us to do this. Because we live in a world where we’re used to thinking that no-one has a right to tell us what to do, and who are these Bishops to say one thing after Vatican II and another thing now? Well, as Catholics, we’re part of a society, the Church. And any society has rules that govern its members, for the good of those members and the good of that society, and any such society has ways in which such rules are made. In the Church, Christ appointed His Apostles to make such rules, “whatever you bind on earth is bound in heaven”(Mt 16:19; 18:18), He told them. In the early Church, the very earliest record we have after the Bible records a whole series of regulations called the Didache (n.8), The Teaching of the Apostles, which regulated the lives of the early Christians. And those regulations include very particular regulations on fasting: that Christians were to fast on Wednesdays and Fridays. Today, the legal minimum that our bishops are asking of us is much less, merely to abstain from meat on Fridays. But our bishops are making these rules with the same authority from Christ that the Apostles had, and they are making it with the same desire to lead us to salvation.

This week's newsletter handout, containing explanations and comments about this is viewable at this post: "Bishops Re-Establish Friday Abstinence from Meat"

There is also guidance at http://caritasveritas.blogspot.com/2011/08/friday-penance-and-english-welsh.html


Breaking the Law of Abstinence is a Mortal Sin
The seriousness of the Christian obligation to do penance is such that the Church teaches that disobeying this now re-established precept is a grave matter, i.e. failure to make "substantial observance" of this law is not only a sin but is a mortal sin (Pope Paul VI, Paenitemini, III.II.1).
A post describing this matter is more detail is viewable at this post: "Eating Meat on Fridays is a Mortal Sin"

The Bishops of England and Wales have met to discuss their priorities for the next 3-5 years. At an announcement at the end of their bi-annual meeting in Leeds from the 9-12 May the bishops outlined their resolutions for the next few years including stating the desire to re-establish the practice of Friday penance by giving up meat on Fridays.
The resolutions are outlined below...
Catholic Witness - Friday Penance
By the practice of penance every Catholic identifies with Christ in his death on the cross. We do so in prayer, through uniting the sufferings and sacrifices in our lives with those of Christ’s passion; in fasting, by dying to self in order to be close to Christ; in almsgiving, by demonstrating our solidarity with the sufferings of Christ in those in need. All three forms of penance form a vital part of Christian living. When this is visible in the public arena, then it is also an important act of witness.
Every Friday is set aside by the Church as a special day of penance, for it is the day of the death of our Lord. The law of the Church requires Catholics to abstain from meat on Fridays, or some other form of food, or to observe some other form of penance laid down by the Bishops' Conference.
The Bishops wish to re-establish the practice of Friday penance in the lives of the faithful as a clear and distinctive mark of their own Catholic identity. They recognise that the best habits are those which are acquired as part of a common resolve and common witness. It is important that all the faithful be united in a common celebration of Friday penance.
Respectful of this, and in accordance with the mind of the whole Church, the Bishops' Conference wishes to remind all Catholics in England and Wales of the obligation of Friday Penance. The Bishops have decided to re-establish the practice that this should be fulfilled by abstaining from meat. Those who cannot or choose not to eat meat as part of their normal diet should abstain from some other food of which they regularly partake. This is to come into effect from Friday 16 September 2011 when we will mark the anniversary of the visit of Pope Benedict XVI to the United Kingdom.
Many may wish to go beyond this simple act of common witness and mark each Friday with a time of prayer and further self-sacrifice. In all these ways we unite our sacrifices to the sacrifice of Christ, who gave up his very life for our salvation.