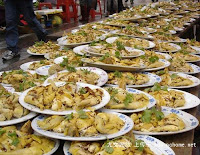 Mt 22:1-14; Isa 25:6-10a
Sometimes I’m good, but sometimes I can’t be bothered, and I think this is a phenomenon that most people would recognise in themselves.
I make this observation because we heard in the gospel today the Lord Jesus give the parable in which an invitation was made to something great, and yet most of those were invited could not be bothered. Some of those were invited reacted violently, but others, and I would suggest to you that if this is a model of real life, then this was the majority, of the majority of the others it doesn't say that they REJECTED the invitation, it doesn't say that they despised the person who gave it, it just says, "but they were not interested: one went off to his farm, another to his business"(Mt 22:5) and so forth.
And so the Church gives us readings today to reissue this invitation to us, with two rather different reasons as to WHY we should respond to this invitation: from the New Testament, a threat of punishment of those who do not respond, and from the Old Testament, a reminder of the beauty and promise that awaits those who do respond to the invitation.

The parable that Jesus gave uses a common scriptural image of the wedding feast. The symbolism inherent in this is that the wedding is between God and His chosen people, which in the new covenant means the Church, means that body of people that you and I belong to.
The banquet, as we had spelt out in that text from the Prophet Isaiah, the banquet is not just about food. Yes, the satisfaction food gives is offered to us as a symbol, but a symbol of a much deeper satisfaction, including the satisfaction that will come when all of the suffering and limitations of this world are removed: “He will remove the mourning veil covering all peoples... He will destroy Death forever. The Lord will wipe away the tears from every cheek”(Isa 25:7-8). And the destruction of Death is the ultimate symbol of the destruction of all that is wrong with this life.

According to the parable, those were originally invited failed to respond, as Jesus put it "those were invited proved to be unworthy"(Mt 22:8). They were destroyed, and others were invited in their place.
In the early Church they would've had a profound awareness of how they had replaced the Jewish people, however, the final part of the parable is addressed to any feeling of complacency that might exist in the Church: we need to have a wedding garment if we are to enter the feast. In the Jewish tradition the wedding garment was supposedly a symbol of the good works that the faithful clothe themselves with. If we would enter that perfection, if we would feast in that banquet, then we need to clothe ourselves the wedding garment of the virtuous life.

As I started by saying, sometimes I’m good, and sometimes I can’t be bothered.
If we want to ‘be bothered’ then let us remember who is inviting us, and the greatness of what we are being invited to. Otherwise, the words spoken by our Lord might apply to us, “many are called, but few are chosen”(Mt 22:14).
Posted by Fr. Dylan James, Catholic Priest, dual American-British citizen at 00:41