Christ the King, Year A, Shaftesbury 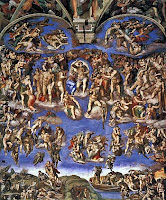 Mt 25:31-46
I want to say a few words today about something important, something the importance of which I was reminded of just this week, namely, the fact that it is not you or I who decides what is right or wrong but God. And it is because of that that He is the one who will judge us.
At the end of time, as we heard in that gospel passage, the Son of Man will return in glory, escorted by the Angels, sit upon His throne, and He will judge the nations and judge us before Him.

The Lord Jesus will judge us according to our behaviour, according to whether we have done right or whether we have done wrong. He will judge us according to what HE says is right or wrong, and His claim to have the right to do this is that it is HIS world that we live in. God has created this world, made it according to His Wisdom and plan, and the fulfilment of everything in this world, including you and me, the fulfilment of every action depends on being in accordance with His Wisdom. If I say that something is "right" when in fact it is contrary to His Wisdom, contrary to what He says, then I'm wrong.
And, He hasn't made it difficult for us to know what is right or wrong, He has given us the gift of reason to discern His Will, in addition, when He came down from heaven to earth He gave us His example to show us what is right and wrong, and He also gave us His teaching to show us those same truths.
So, to consider the example that this gospel passage focused on, namely, care for those in need, the hungry, the thirsty, etc. Reason alone can deduce that my needy neighbour is made in the same image as I am and has a claim to be treated as I wish to be treated myself. The example of Jesus shows us that He cared most especially for those who are most in need. And His teaching told us that we must do the same.

The Lord Jesus has made it clear to us what we must do, how we must live, what is right and what is wrong. But let me make this further point, He has told us how we must live not so much for His benefit as for ours. It is for our good, our purpose, our fulfilment, that we live according to His Wisdom, according to what He says is right or wrong.
And His judgement at the end of time will simply manifest and proclaim what we have made ourselves to be by our own actions, by our own doing or not doing what is truly right or wrong. If we have been selfish and not caring then His judgement will manifest that this is the kind of person we have become. Conversely, if we have been loving and caring, and have fulfilled ourselves in His image, by His grace, then His judgement will manifest that that is what we have become.
And for some of us this manifestation will come as a surprise: the human capacity for self deceit and pride, to lie to ourselves about what we truly are, perhaps even to give to poor but with bad motives, means that we cannot presume to know how we will be judged. It is His world, He made it, and He will judge it and us within it.