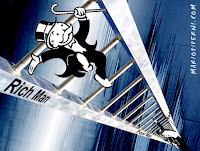 James 2:1-5
There are a great many places around Shaftesbury where people gather. And if you were to look around and try and think where you'd be most likely to see wealthy person sat next to a person with much less money, a rich person sat in the exact same type of seat as a person with less money and prestige, you might look in many places. You might go and look at the train station, but there you'd find the First Class carriage tidily separately off the better half. Then you might look at where people gather to eat. But here too you would find people separated by class: those who eat at the kebab and pizza take-out on the High Street, and those who can afford to eat at Chutney's Indian restaurant, and then those who eat at the Fleur de Lys - I’ve barely seen the outside of that place, let alone the inside!

But, I think I'm right in observing that, the place in town where you would be most likely to see people of all sorts of social classes sat down in the same place, sat down in the same seats, sat down with no class division at all, that place is the place where you are right now: in the church.
Now, I'm not saying that this is something that is completely and properly lived out ALREADY by us, but, in as much as this is true in church, and I think I’m right in saying that it’s truer in church than anywhere else around here, then it is something all together "right and just". It is altogether as the letter from St James (that we heard as our second reading) would have it. As we heard him say, "do not try to combine faith in Jesus Christ ... with the making of distinctions between classes of people"(James 2:1), and he proceeded to then give some precise examples about not offering different seats for different classes of people.

What I am saying we can observe here in Shaftesbury is something that I can remember observing many years ago when I was a teenage student in London. I studied in South Kensington and around us students there were literally (foreign) princes and paupers, people who slept on the streets and people who slept in silk sheets. But on Sunday I would see people from all those categories and more at Mass together at the Oratory. All coming together because they worshipped the same God. All coming to the same place to worship. All being treated the same when they walked through the church doors. Princes and paupers.

It is, of course, not a truth that's always perfectly lived out. I know that, sadly, there are places, not many places, but sadly I have heard that there are or have been places where there are fancy balconies put aside for the rich. The fact that it is not so here, or anywhere I've seen, is something to be glad about.
However, I would suggest to you, and I'm sure St James would do more than just politely suggest it, I would suggest to you that no matter how true this may be of our seating arrangements in our church there are surely two points that must follow.

Second, St James would remind us that we must also treat each other OUTSIDE church in a way that likewise acknowledges our mutual relationship with the one true Lord. If I recognise that that person is see outside of church is made by the same one Lord God then I cannot fail to see my obligation to love and care for him. To back back to my student observation: if the prince at Sunday Mass at the Oratory sees the homeless at Mass too then surely he should be reminded of his need to care for the homeless. We have other readings in the following weeks that are also from St James as he spells out further details on this point, and it is important that we are listening in the weeks ahead to what he says.

So, to conclude and repeat the observation I started with, it is in our church more than anywhere else in town that someone is most likely to be treated with equal dignity. The challenge to us is to not only live that more FULLY in church but also to live out its implications in our daily lives.
Posted by Fr. Dylan James, Catholic Priest, dual American-British citizen at 00:05