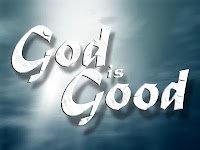 So, to return to my opening question, about the desirability of believing in Him, about how He has shown Himself to be a good God, and about how it is good to believe in Him:
Evil seems, at one level, to be the ultimate reason to not believe in a loving God.
But, in the face of the incarnation, in the light of seeing that He has entered our world of suffering and pain, in the face of seeing Him upon the Cross,
we see that He has transformed what seems to show Him unloving, and made it into the greatest sign of His love.
He has, in this, shown us that it is good to believe in Him, and to thus by faith share in a communion of love with Him in the midst of a world where suffering otherwise can leave us alone.
So, given this, and given, as in other weeks I've been touching upon, and as our series of talks on faith are articulating, given that reason shows that there are reasons to believe in Him, then, the Cross also shows that it is GOOD to do so as well.
And so we can CHOOSE to believe in Him: He is a good and loving God, and this is what He has SHOWN Himself to be.
Posted by Fr. Dylan James, Catholic Priest, dual American-British citizen at 00:05