Consecration of the Parish to Our Lady, on the Feast of the Most Holy Trinity, Shaftesbury 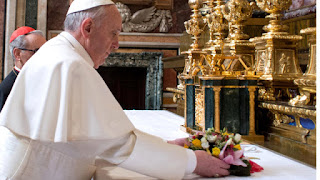 Today, I'm going to consecrate the parish to the Blessed Virgin Mary. I'm doing this now for a number of reasons: first, because it’s May, which is her month; second, because it’s something I should have already done during my 6 years here (even though I'm sure other parish priests have done this before me, it should be done and re-done, renewed); but, third, most directly, I'm doing this in union with Pope Francis who many of you will have read recently consecrated his papacy and re-consecrated the Church to Our Lady in the month of May -on the recent feast of Our Lady of Fatima.
I’m sure we all recall the image of him, the very first day of his papacy, directly going to the Church of St Mary Major to lay flowers at her shrine.

But what is a Marian consecration? How does it benefit us? and, how might it relate to today's feast of the Trinity?

A consecration is when something is dedicated to something. In a Marian consecration we dedicate ourselves to her. We offer her our lives, and all that is part of them: our hopes and fears, joys and sufferings, our good deeds, the crosses we carry –everything, we consecrate it all to her. The practice of doing this, of giving ourselves to Our Lady, is both ancient and new.
It’s new because it regained a new impetus after the call for this in the apparitions of Our Lady at Fatima in 1917, and the fact that Pope Francis had his consecration made for him in Fatima on that feast day is a reminder of that. We might also think of the motto of Pope John Paul II, “Totus Tuus” (‘All Yours’) –which meant “All Mary’s”.
But it’s also ancient. The phrase of John Paul II was a quote from a Saint Louis Marie de Montfort who is particularly known for the articulation of the meaning of consecrations and Marian consecrations. And we’ll be using a text adapted from him in a few minutes in our consecration.

But who is the one who can best help us be consecrated to God? Surely, the one who was herself most perfectly consecrated to God, namely, Our Lady. On today’s feast of the Trinity we might recall how she was chosen before all time to be the Immaculate Mother of the Divine Son; made so by the power of the Holy Spirit whose spouse she was; and we can recall how all this made her the most perfect daughter of the Eternal Father. She was chosen and consecrated in this role not just for her sake, or for God’s sake alone, but for OUR sake, that God might enter our world through her, that we might become united to Him through the union of the human and Divine that occurred within her consecrated womb.

She is the one who was given to us as OUR mother too, “behold your mother”, said Jesus as He hung on the Cross for us, and saw His loving mother there at His feet. And now, she is the loving and powerful mother who looks out for us from heaven. And when we give ourselves into her hands we give ourselves into the hands of one who loves us more than we love ourselves; one who, as the Mother of Divine Wisdom, knows best what to do with what we offer her –our deeds, our prayers, our merits; one who will most effectively direct all things to the One Triune God to whom she herself was so beautifully consecrated.
So, who helps us grow in our consecration to God, well, as Pope Francis put it this month when he was recently leading the Rosary, “Our Lady is the mother who helps Christians grow”

The first part of said by the parish priest, the second by the whole congregation
Priest, kneeling before the Lady Altar:
O Immaculate Heart of Mary,
Queen of Heaven and Earth,
and our tender Mother,
in accordance with your ardent wish made known at Fatima,
and in union with Pope Francis’s consecration to you
of himself, his papacy, and the Church,
I consecrate to your Immaculate Heart:
myself,
and this parish entrusted to my care,
I consecrate and commit to you all the members of this parish,
beginning with the weakest:
the unborn, the sick, the disabled, and the elderly.
I commit to you our families, our children, our young people,
the single and the widowed.
I pray especially for dysfunctional, hurt and broken families,
for those seeking meaning in life but failing to find it;
for the unemployed, the lonely and the desperate.
I pray for those who are away from the parish,
and are distant from the Church.
Holy Mother, by your powerful intercession,
obtain for us all the graces we need,
And call down the Holy Spirit, your spouse,
to heal and sustain us,
To lead and conform us to the image of Christ your Son.

Please join me in saying together:

We, the parishioners of St Edward’s,
renew and ratify today in your hands,
O Immaculate Mother,
the vows of our Baptism.
We renounce forever Satan,
all his works,
and all his empty promises.
We give ourselves entirely to Jesus Christ,
to be more faithful to Him
than we have ever been before.
In the presence of all the heavenly hosts
we choose you this day,
for our Mother.
We deliver and consecrate to you,
our bodies and souls,
our goods, both interior and exterior,
and even the value of all our good actions,
past, present and future;
that you will dispose of them as you know best,
for the greater glory of God,
in time and in eternity.
Amen.
Adapted from St. Louis De Montfort's Consecration
Posted by Fr. Dylan James, Catholic Priest, dual American-British citizen at 00:05