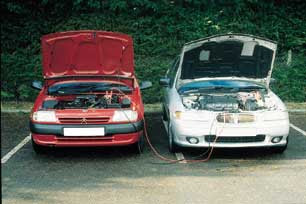 Lk 10:25-37
We just heard the parable of the Good Samaritan, and like yourselves, it’s a parable I’m heard countless times. However, for all my familiarity with the text, there is one question that only occurred to me quite recently: Where was the Good Samaritan going to?
He must have been travelling for a purpose. And that purpose must have been interrupted by his helping the man who was in need. If that Samaritan was like most of us, he must have felt busy, must have felt like he didn’t want to be interrupted. HOWEVER, and this is my point: to love my neighbour means I must be willing to be inconvenienced in order to help him.

I was struck by this rather obvious point when I had a flat car battery. I’d left my car at Tiverton Parkway train station, which as some of you may know is in the middle of nowhere. My train got me back there late at night, practically no one was around, and I realised that my car battery was flat. Fortunately my father had raised me well, and, like always, I had a pair of jump leads in the boot. But these are no use unless someone else’s car is there with a working battery.
It was dark, remote, and there was just one person I could see. So I asked him for help. And I realised that I was interrupting this man who had a desire to get somewhere else. And I was struck too, in a way I never had been before, that the Good Samaritan must have been desiring to get somewhere else when charity called on him to help that man in need.

That night I was fortunate. That man allowed himself to be inconvenienced and he helped me. But I have often reflected since that part of what it means to be “a neighbour” to someone, to “take pity on him”(Lk 10:37), is to inconvenience myself.
Let me put it another way, St Therese of Lisieux taught that, “the language of love is sacrifice”. Well, every time I make the choice to love someone, to be LOVING to someone, it is a choice to make a sacrifice. Sometimes of my time, sometimes of my money, sometimes simply of my energy.

Surely, a simple test of whether I am loving is this: do I feel the sacrifice?
Is my generosity to the poor such that affects the way I live because I have less money for myself?
Is my willingness to let others interrupt me such that it shows I think of others before myself?
Now, it is true, that we all have many responsibilities, and a need in front of me now might not be as important as a need further away –if you helped an old lady cross the street that’s a good thing. But it’s not a good thing if you should have been feeding your starving child at the time. i.e. I’m not saying that we must always allow ourselves to be interrupted.

But, my WILLINGNESS to be interrupted is a pretty good test of my love. And my feeling, or not feeling, the sacrifice involved is a pretty clear sign too. If I don’t feel the pain then I’m probably not sacrificing, I’m probably not loving.
To come back to my opening query: the Good Samaritan was going somewhere else when he stopped to help the man in need. If we would be “a neighbour” we need to have that same spirit in us too.