Feast of the Holy Family, Shaftesbury 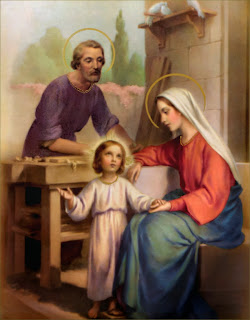 Mt 2:13-15.19-23
We keep today a beautiful feast, that of ‘The Holy Family’. Having celebrated, just a few days ago at Christmas, the birth of the Lord as a baby, we now recall the life of that perfect family: St Joseph, Our Lady, and the child Jesus.
We know it wasn’t a typical family:
the child was the Lord God Almighty Himself in human form;
the mother was sinless from the first moment of her existence, the ‘Immaculate Conception’;
and even St Joseph was a ‘saint’ –so not exactly run-of-the-mill either.
But even though it was not a TYPICAL family it is put before as THE ‘normal’ one because of the example of Christian living, and Christian FAMILY living, that it lays before us.

I’d like, this year, to focus on the figure of St Joseph, in part because this year’s Gospel places him before us more than the other years, but also,
because placing the father before our focus is something that might, in itself, be notable as being rather counter-cultural for us today in that our post-Christian society: Our society has increasingly made fathers an optional part of family life –even though repeated studies have shown that children grow up differently, more healthily, if their fathers are around.
A man and a woman, a husband and a wife, each bringing something different and yet complementarily, so that the two together form one whole, committed to each other for life, looking to bring for a life beyond their own –this what we see in Our Lady and St Joseph, their common love and life ordered towards the child they bring into the world.

All this would sound sexist, maybe patriarchal, to many in our modern world.
So, let us consider two things about the form of leadership that St Joseph offers, because it’s the very opposite of what feminist critiques of patriarchy condemn:
First let us note that St Joseph is a man who LISTENS:
There are three big decisions that the Gospels record him making, and in each case he does not do what HE wants, but what he is told to do –told by an angel:
(1) He takes Our Lady home as his wife, despite her not being pregnant with his child;
(2) He flees to Egypt to avoid Herod’s slaughter of the infants –because this is what the angel tells him to do;
(3) He returns from Egypt –again, in obedience to the angel.

Second, let us note that St Joseph is a man who is never recorded as having ever said ANYTHING. He isn’t recorded as being mute, so he presumably spoke, but it somehow seems more characteristic of him to be DOING things, not talking:
taking them to Bethlehem,
taking them to Egypt,
returning them to Israel.
NOT running around bossing and telling other people what to do.

So, as we today celebrate the feast of the Holy Family, and think about how they can be a role model for modern families, let us think in particular what St Joseph shows us:
A family in which there is LISTENING rather than self-assertion is a family capable of being open to God’s will, capable of being loving and happy, capable of bringing Christ into the world.