listen to ‘28th Sunday in Ordinary Time, Year A, Audio’ on audioBoom 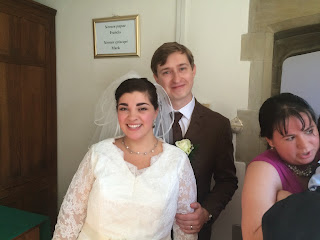 Mt 22:1-14; Isa 25:6-10
This Saturday we've just had a wedding here in Shaftesbury, of Angela and James. I've been preparing them for this for some months, which has been a great pleasure, and this Saturday afternoon was finally the big day!
Like every wedding, this one has had its moments of tension in getting the preparations all prepared. I remember a wedding I was at over a decade ago where the bride burst into tears at the night before: Why? Because the flowers were the wrong shade of pink(!). I have observed over the years that the preparations for a wedding can be VERY stressful.
However, and this is a point I wish to stress, I have also observed that on the day itself, it seems almost impossible for things to go wrong. Why? Because all you REALLY need, all that REALLY makes it joyful, all that makes it a SUCCESS is: the presence of the person you love.

Our gospel reading today uses such a symbol of a wedding banquet to describe heaven, to describe what we have been called to. And this gospel text does so by drawing on the many Old Testament texts, like our first reading from the prophet Isaiah, that describe the future banquet that God has prepared for His people.
Those preparations, in history, in pages of the Old Testament, in the workings of the Church of the New Testament striving to our ultimate fulfilment in heaven,
those preparations have been long and arduous -even more so that those of Angela and James, even more so that the poor bride whose flowers were the wrong shade of pink.
But those preparations have been aimed at a wedding in the same sense, namely, a union whose joy is defined by it being a union of LOVE, a union that is JOYFUL because we are WITH the ONE we love.

Like most parables, the one we just heard in the Gospel has many levels.
On one level, Christ chose the image of a wedding banquet to indicate the great JOY that the Messianic banquet of heaven will contain.
In a different sort of symbolism, however, I might notice the number of different places in which this parable is writing about ME (and you).
I am one of those who has turned up lacking the wedding garment of good deeds, and so I deserve to be thrown out.
Conversely, I can also see myself as one of those called and allowed to enter to replace those who failed to turn up -dragged in from the highways and byways despite my initial unworthiness.

Either way, I have been invited to the wedding feast, the wedding feast for the marriage of "the son".
But who is "the Son" marrying?
At its deepest level, "the Son" in the parable is Jesus, and the one He is marrying, His bride, is the Church.
And then, at a specific level, this means I can say that He is marrying ME -that all this fuss is about ME. All the wedding banquet is for ME! Because He loves me.
I have been invited to a wedding banquet only to discover that the one getting married is ME!
Of course, this is also where the mixing of metaphors in parables can get confusing. I am a man, so the symbolism of me "marrying" Jesus only works on some levels -Christians, after all, are opposed to same-sex marriage!

But at its simplest level, this is the point:
God has called you and me to heaven, a place so wondrous that He uses the joyful image of a wedding banquet to describe it.
And, like any wedding banquet, what REALLY makes it joyful, is that it is a thing of LOVE.
He loves me. He died for me. He gives me His forgiveness and grace. And what He is yearning for is that you and I should yearn to love Him too, in this, the wedding banquet of the Lamb.