3rd Sunday of Advent, Year B

listen to ‘3rd Sunday of Advent, Year B’ on audioBoom 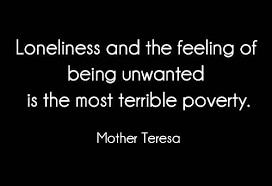 Jn 1:6-8,19-28; 1 Thess 5:16-24
If you were given the opportunity to stand before the European Parliament and tell them what you thought was wrong the modern world, and, more particularly, what you thought was wrong with Europe, what would you say?
Two weeks ago Pope Francis addressed the European Parliament and told them what he thought. (You can read a summary here). Many people were surprised at what he said. I, too, was rather surprised when I read his diagnosis.

As we all know, Pope Francis has spoken much about poverty. He has also spoken a lot about evangelisation. However, when he spoke to parliament the issue he focussed on was LONELINESS. He said that Europeans have forgotten that they are “beings in relationship”, instead, they think of themselves as primarily being individuals. And, unsurprisingly, we have created a society of isolated, lonely, individuals. And he attributed the neglect of the poor, the neglect of the elderly, etc, to all be symptoms of this more general social problem.

Pope Francis attributes this to something even deeper, namely, to the fact that modern Europe has forgotten God. We have forgotten the One who is our Father, the one in whose image we are all made, and so it is hardly surprising that we have forgotten the deep identity that binds us all together as a family, that makes us –“beings in relationship” (as he put it). We ARE “beings in relationship”, we ARE all made by the same one Lord, but we live in a world that does not SEE it.

On a different note, in the Gospel today we heard about something else that was not seen, was not recognised, namely, John the Baptist told the people that there stood among them, “unknown to” them (Jn 1:26), the One they were waiting for. The Church gives us this text today to give us a reason to “rejoice” as our entrance antiphon and second reading put it (1 Thess 5:16): rejoice because, even while we wait for His Christmas coming, He is already present among us.
Holy Mother Church knows that the preparations for Christmas can be an ordeal in themselves; she knows that we need to be reminded of a reason to “rejoice” –and the reason we are given today is that He who we long for is already with us.

Let me draw this to a conclusion by tying those two thoughts together:
I can live the final couple weeks before Christmas in a lonely isolated state, even if I am in the midst of people, full of nothing but pre-Christmas busy-ness. Or, I can recall the presence of the Lord. I can recall that every Christmas card is being written to a person made in His image. I can recall that every present bought is for a person that God wants to relate to as their Father. I can remind myself that every person I am tempted to PUSH and shove past in a queue is actually someone who is called to be part of the same spiritual family that I claim to belong to.
And if I do that, then I will have less of that sense of loneliness that the Pope speaks of, and I will cause less of that loneliness in others, and I will “rejoice” in the presence of the One who “stands among you, unknown to you” (Jn 1:26).