An Undivided Heart, 4th Sunday in Ordinary Time, Year B

listen to ‘An Undivided Heart, 4th Sunday in Ordinary Time, Year B, Vigil Mass’ on audioBoom 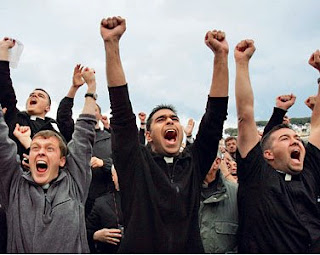 1 Cor 7:32-35
At the seminary where I go to teach each week (Wonersh) there was a larger-than-usual number of men starting in the first year this year. In addition to there being more of them they were also noticeably younger than last year -a trend that has been noticeable throughout the past decade: the men coming forward for the priesthood are younger: men who are in their 20s or even 19 or even 18.
Now, as you might imagine, these young men are very aware that they embarking on something that the society around them views are very unusual. And a good number of them have described the same type of questionings that I can remember people putting to me back when I was a young man entering seminary. And most of those questions relate to celibacy: It is really possible to be happy if you're celibate? Are you REALLY celibate? Is it really worth it?

It's that final question that really gets to the nub of the matter: The fact that there is something SO important being pursued in a priestly vocation that a man is willing to put aside EVEN the possibility of marriage and children.
I think, myself, that there is no greater single witness being offered by a young priest than this act of renunciation in celibacy,
No greater sign that there is something BEYOND this world,
No greater sign that everything that our unbelieving world holds as essential is actually NOT essential, is actually something that can be put aside in the pursuit of something else,
namely, in the pursuit of God.
The point is this: even before he opens his mouth to preach the celibate's decision to put the possibility of marriage aside for the sake of pursing God makes the un-believer question his common assumption that sex, money, and worldliness is the only way to happiness.
Of course, it's because it's such a powerful sign that the media rejoices to find examples of the priests who fail in their celibacy.
But even those failures can't fully obscure the fact that most priests are faithful to their vows, and are happy doing so.
And being so is a SIGN of the truth that there is MORE than this passing world, there is GOD.

I mention this today because St. Paul speaks of the value of celibacy in our second reading, of being free to cling to the Lord with "an undivided heart"(1 Cor 7:35).
Of course, elsewhere St Paul also speaks of the dignity of marriage -and that it too is a good, a vocation from God. But the Catholic Faith teaches, and popes have reiterated it repeatedly in the past century, that celibacy for the sake of God is a higher vocation than marriage, that it offers a more immediate means of union with God:
In marriage, a person loves God THROUGH loving their spouse,
In celibacy, a person loves God DIRECTLY, with "an undivided heart"
(c.f. Pope St John Paul II: “virginal love goes directly to the person of Christ through an immediate union with him, without intermediaries: a truly complete and decisive spiritual espousal” (St John Paul II, Familiaris Consortio n.16).
Vatican II: "For renouncing thereby the companionship of marriage for the sake of the kingdom of heaven (cf. Matt. 19:12), they embrace the Lord with an undivided love altogether befitting the new covenant, bear witness to the resurrection of the world to come (cf. Luke 20:36), and obtain a most suitable aid for the continual exercise of that perfect charity whereby they can become all things to all men in their priestly ministry. ...Students ought rightly to acknowledge the duties and dignity of Christian matrimony, which is a sign of the love between Christ and the Church. Let them recognize, however, the surpassing excellence of virginity consecrated to Christ" (Vatican II, Optatam totius n.10);
Pope Pius XII: "This doctrine of the excellence of virginity and of celibacy and of their superiority over the married state was, as We have already said, revealed by our Divine Redeemer and by the Apostle of the Gentiles; so too, it was solemnly defined as a dogma of divine faith by the holy council of Trent" (Pope Pius XII, Sacra Virginitas n.32, summarising the Council of Trent, Sess. XXIV, canon 10.)) 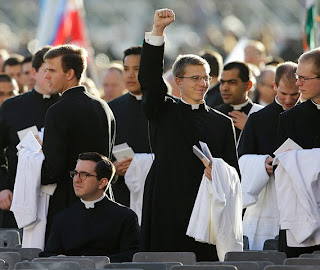 Let me conclude by noting that there is a truth here for ALL of us to acknowledge, because most people and most of you are called to marriage, not celibacy. And yet this point illuminates something in your lives too. Let me note four brief things:
First, the celibate's cleaving to the Lord with "an undivided heart" is a sign that EVERYONE is to value the things of God as HIGHEST. Even if you are enjoying marriage you are to enjoy it in such a way that God comes first (c.f. “Seek ye first the Kingdom of God…” (Mt 6:33)), in such a way that your loving of your spouse is a means to loving God -not a diversion from loving God.
Second, the celibate state of life gives a freedom to be dedicated to God with a focussed and RECOLLECTED mind. This should remind all of us of the need and value of putting aside time for God in prayer. And we need to put this time aside -just to be fully human. Let me recall the words of Pope St John Paul II, “Do not be afraid to give your time to Christ! … Time given to Christ is never time lost, but is rather time gained, so that our relationships and indeed our whole life may become more profoundly human.” (Dies Domini, n.7)
Third, What is called 'the hundredfold'. Our Lord promised that He will reward a 'hundredfold'(Mk 10:28-30), even in this life, anything that someone gives up to follow Him, including the possibility of a spouse. Not only is this the promise of the Lord, and solemnly taught by His Church, but it is something that Christian EXPERIENCE testifies to down the centuries. As is frequently said: God will not be outdone in generosity! And the celibate experiences and testifies to others this fact: When he gives himself to God in this fashion he receives even more back.
Fourth, and finally, let us note that this shows that putting-something-aside to choose God first, whether we are in self-denial in Lent, or denying ourselves some other small thing, self-denial is a way to happiness, not a way to sadness -at least not if we do it with LOVE, love of God.
And so this text from St Paul about loving God with "an undivided heart" has something to teach ALL of us.