3rd Sunday of Easter, Year B 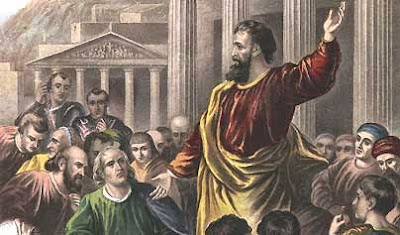 Acts 3:13-15.17-19; Lk 24:35-48
I’d like to reflect on what it must have been like to actually meet the Risen Lord.
And one of the simple things I want to point out is the CHANGE that that meeting produced in the people He met.

We heard in our first reading about how St Peter went out and preached to the crowds. If you think about his message it was actually an exceptionally brave thing he was saying:
He was telling the people he was speaking to that THEY had killed the Messiah. They had crucified the very one who they and all the Jewish people were waiting for:
“It was YOU who accused the Holy One, the Just One… you killed the prince of life”(Acts 3:14-15)
And, let us remember who this brave Peter was:
He was the same man who only shortly before had been hiding in the Upper Room with the other disciples, hiding for “fear of the Jews”(Jn 20:19) as says elsewhere.
He was the same man who when Jesus had been arrested had disowned Him three times.
And yet, now he was bold, and preaching in the public. Preaching a message that condemned the very people he was addressing.

So, what had changed Peter? Made him into “Saint” Peter?
It was this: The experience of encountering the Risen Lord.
Now, we might note that it still took the power of the Holy Spirit at Pentecost to send him out, but, as we read the narrative it is clear that the ENCOUNTER with the Risen Jesus CHANGED Peter: Today's account refers to the "joy" that came to fill the previously-fearful disciples (Pope Francis often refers to joy as the response of someone who has met the Lord); and in the other accounts we can likewise note the CHANGE that occurs in those Jesus appears to.
And it wasn’t just Peter who was changed. We see this same transformation in the other apostles too.

This transformation, of the EFFECT of it is described in the book of the Acts of the Apostles, which we heard from in our first reading. And in case you’re not aware of it, our first reading is taken from the Acts all through Eastertide.
And what we hear in all those readings is the activities a group of transformed men and women, who went out and boldly told people about the Risen Lord, went all across the Mediterranean basin, who encountered persecution and martyrdom.
As I said, these men and women had been hiding the Upper Room, but were transformed by the encounter with the Risen Lord.

That meeting with Jesus, as we heard in our Gospel text, was not a comfortable meeting. How could it be comfortable to meet someone who came back from the dead?
The texts says they were in “fright and alarm”(Lk 24:37), that they were “agitated”, that they had “doubts” and were “dumbfounded”. He thus made it clear to them that he wasn’t just a vision or a ghost, that He was flesh and blood, risen from the dead, and so He had them touch Him, and He showed them He could eat.
For us who live 2000 years after it is possible for us to doubt as they first doubted.
However, one of the signs to us of the reality of what they experienced is the CHANGE that the encounter produced in them.

To conclude, what lesson can we learn from this?
Firstly, the reality of His rising from the dead.
Second, to realise the change that can be worked in us too, if we will:
accept the testimony of those who saw Him; and,
be empowered by the Spirit that He sent into them from above.
If we do, then the “Peace be with you”(Lk 24:36), peace to troubled, frightened, and agitated souls like theirs and ours, that “peace” can be ours too today.
Posted by Fr. Dylan James, Catholic Priest, dual American-British citizen at 00:05