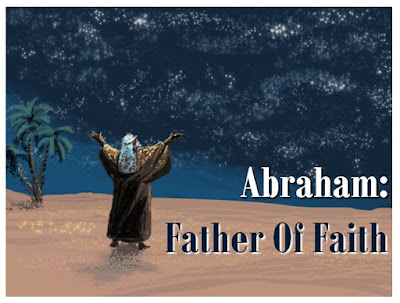 Heb 11:1-2.8-19
I want to say a few words about faith, because people often say odd things about faith.
People sometimes say that faith is a kind of vague thing, or that is a ‘leap in the dark’.
Actually, it’s something simple and concrete.

If we want to know what faith IS we should look at someone who had faith.
This what we heard St. Paul do in our second reading from Hebrews –and he looks at Abraham.
Abraham and Sarah were old, beyond the age of childbearing.
Yet, God promised Sarah she would have a child.
And, God promised Abraham he would be the Father of a great nation
He told Abraham to leave the land he was happily living in, and go to a new land.
A better land that God promised him. The Promised Land.
What shows that Abraham had faith?
It was how he RESPONDED to what God told him that showed his faith:
He TRUSTED in the promises God gave him -this is what faith is all about.
And, What showed that he trusted? He fact that he went out WITHOUT YET SEEING the promised land

The Catechism gives us the same simple truth about the nature of faith:
‘Faith is man’s response to God’ (CCC 26) –response to what He has told us

What does this mean for ourselves?
It means that we, too, must respond to what God has said
We, too, must trust in His promises

That raises the question of “What are His promises?”
I’d suggest two mistaken approaches to faith in our own lives,
First, we can let our faith be too vague –‘we don’t know what God wants us to do’
-‘we don’t know what God’s really like’
-faith is just a feeling, ‘I’m a trusting kinda guy’
This empties the Gospel of content, empties it of its power to save
Second, we can falsely imagine that God’s promises are about things He hasn’t actually said:
“I’m going to get that promotion, God want me to get that promotion, I BELIEVE I’m going to get that promotion”
“God wants my husband to stop being a useless couch potato, just sitting there, I BELIEVE he is going to change”
-I’m sorry, God did not make these promises, so, it’s not a matter of FAITH
-these are good things to pray for and beg God for,
but they are not a matter of Faith –there was no promise

Right now, I’d like to know whether what my new parish will be like:
will I enjoy it? what will the people be like? how much harder will I have to work?
But God hasn’t promised to show me these things.
There ARE things He HAS promised me, and has promised you:
Heaven as the end goal, if we love Him, if we trust Him, if we seek His forgiveness daily
To be with me and strengthen me: ‘I am with you always’; ‘I will not leave you orphans’
That all things work to the good of those who love the Lord
What He asks is that I trust Him now. That I accept that His mind is bigger than my mind, that He knows better than I know.
Just as He promised Abraham the Land, but Abraham did not yet see it
He has not shown us every detail of our own futures
–we know the end destination of those who trust in the Lord: Heaven
-but, we do not know the pathway by which He will lead us there

Faith isn’t a leap in dark. Faith is our response to the promises God has made,
and what ‘having faith’ means is that we trust in His promises.
Posted by Fr. Dylan James, Catholic Priest, dual American-British citizen at 00:30