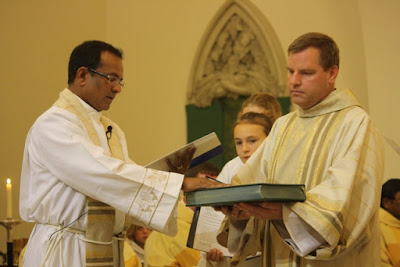 Tonight I'd like to say some words about power and service.
During this ceremony I am going to be juridically granted power over this parish. This will be symbolised by the two things especially: (1) the Dean (as the Bishop’s representative) reading the letter of appointment from the Bishop assigning me as parish priest of West Moors (and the area included in this parish: Ferndown, Verwood, and neighbouring suburbs and villages), and, (2) the Dean handing me the keys of the parish.
The point I want to make, however, is that it might seem like a rather curious SORT of power that I am being given: a power to serve, a power to benefit others, not a power to benefit myself –all of which is part of the Christian concept of authority, but isn't how most people in our society today think about power.

The keys I will be given are reminiscent of the Keys of the Kingdom that the Lord gave to Peter (Mt 16:19) when He appointed him and his successors as head of the Church. Let me make some comparisons that hold for both Peter and me.

The power I possess as a priest EMPOWERS me to baptise others. But I don't benefit when they are baptised, rather, they benefit by it.
The power I possess as a priest empowers me to forgive sins in the sacrament of Confession. But, again, I didn't benefit when they receive forgiveness, they benefit by it.
We might say something similar about my power to offer the sacrifice of the Mass, to officiate at weddings, and so forth:
I have the keys. I have a juridically established authority that carries with it a certain type of power, power in the sense of the ability to do something that someone lacking that authority can NOT do.
Yet, this authority exists for the benefit of others. It does not exist for my benefit.

What I have said here actually holds true of ALL authority, in the Christian sense, even though we often forget it in our secular world. A king, a prime minister, a president –they all have authority, but such authority exists to serve the common good of the people they govern. The common good of any society requires the existence of such authorities.
The common good of a society requires the service of an appropriate authority.
And, authority exists for the purpose of providing such a service.
So, tonight, as we see such keys being handed over, let us remember what this symbolises.
Similarly, as we hear the letter of appointment say that I am appointed to “teach, sanctify, and govern” the people of this parish, let us recall that this is about service.

Let me conclude by noting how this notion of service will expressed at the end of Mass:
At the end of Mass I'll be making an act of consecration to Our Lady. Pope Francis, you may recall, made such a consecration when he became Pope (being parish priest of West Moors isn't quite as significant as being pope, but I hope you'll permit the comparison!).
Our Lady was a servant.
She called herself “the handmaid of the Lord”.
And there is an ancient practice of dedicating our service by committing ourselves to be her “slaves”. I'll symbolise that by a chain that will be blessed and placed around my ankle. I’ll ask that as she served, she will help me serve.
Doing this isn't part of the Church’s rite of induction, so it'll happen at the end of Mass, after the formal liturgy. But becoming such a “slave” expresses what I've been trying to say about this whole rite.

To summarise, tonight I receive authority.
This exists for your service.
I am here to serve this community. This is what authority means.
And, serving you, it is my goal, as it is every priest’s goal, that in serving you I might bring you to serve also, that we might all, one day, reign in glory with the King of Kings because we gave served while here in earth.

[The Rite of Induction used in the Plymouth Diocese isn't available on the web, but you can see a very similar model used by Southwark Archdiocese here]
Posted by Fr. Dylan James, Catholic Priest, dual American-British citizen at 19:00