Pretty or Ugly in Heaven?, Transfiguration 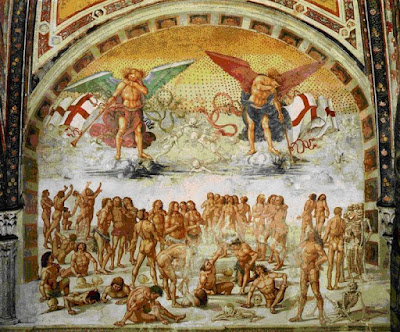 Today’s feast of the transfiguration gives us some indicators.
It was given as a vision to the Apostles Peter, James and John, to sustain them through the cross, by giving a glimpse of what He would look like in His glorious resurrection. He had just predicted that He would die and rise again; here He gave them a vision of glory of that future resurrection.
So, by application, let us consider what YOU will look like in the resurrection of the dead.

First, let us note that you will have a body.
The Lord Jesus rose in a body; He ascended with that body into heaven; He still has that body.
Having a body is simply part of what it means to be human.
This truth contradicts certain fashionable ‘New Age’ notions that we will all disperse into nothingness at death, or just disperse to become part of ‘the great life spirit’ of the universe.
No. You will have a body; you will remain a distinct person. United to God, but not absorbed into Him in a way that destroys your uniqueness.

Second, let us note that your future body will not be like your current body.
This difference was manifested in the Lord Jesus by His glory shining through His body.
Fulton Sheen speculates that this glory shining was our Lord’s natural state, and that it took a continuous act to suppress His glory from shining through.
The point is this: the body is proportioned to the soul; the soul is the form of the body.
The Lord’s soul was glorious, and His body was glorious.

What of MY body?
My current body will die and decay, and be no more.
At the end of time, according to Scripture, the Lord Jesus will return “to judge the living and dead”(as we say in the Creed).
With this General Judgement there will be a ‘General Resurrection’ when we will all rise with NEW bodies.
Those new bodies will be made to be fitting for our particular souls, to be proportioned to our particular souls.
When I die, by the deeds of my life, I will have made fashioned my soul to be beautiful or to be ugly, or to have a mixture of beauty and ugliness. My new body will be made to fit my soul.

The saints, in many and various visions on this topic, have described how those with souls made ugly in sin will rise at the judgment, not merely rise to condemnation, but rise with ugly bodies: bodies suitable for them, bodies that physically express what they are.

The Saints, in contrast, will rise at the judgement with beautiful bodies, bodies that physically manifest their virtues and glory.

In fact, already in this world we get a glimpse of this in the way that we can sometimes see someone’s goodness or see someone’s hatred and bitterness manifested physically in their face.

And what of me, in the final judgment?
The purifications of Purgatory might be of some help. If I am not so evil as to merit final condemnation, then the fires of Purgatory will purge away my ugliness.
But, and this is a point worthy of pondering: my eternal glory, WHETHER I am and HOW MUCH I am “beautiful”, will depend on how I live now on earth, will depend on what kind of person I will have fashioned myself to me, how I will have formed my soul.

To sum that up and come to a conclusion:
The vision of the Transfiguration showed Christ’s transfigured state to give His disciples a vision to motivate them through the difficulties of the suffering that lay ahead.
By application, the thought of our own future transfigured state, transfigured in glory or transfigured in condemnation, gives us a motivation to persevere in virtue.
What will you look like in the final resurrection?