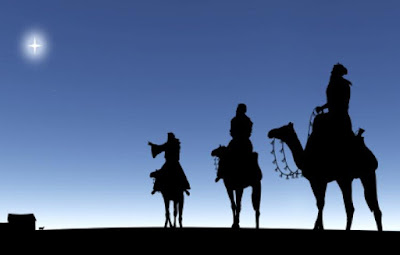 First, let’s consider the DISTANCE they came.
I went to Google Maps, and depending where in Persia they came from, they travelled between 1000 and 2000 miles -that’s a long way to travel on a camel.
They came because there was something they were looking for, and they were willing to travel long way to find it.

Second, let’s consider WHAT they were seeking: they were seeking the fulfilment of a prophecy.
Tales of the Jewish expectation of a ‘Messiah’ had spread throughout the east.
The Jewish prophecies, as we heard in our first reading, spoke of a “light” that would come (Isa 60:1).
The Zoroastrian texts of the magi also expected a star to appear to herald the birth of “a mysterious child” to be born of a “virgin”.
“A VIRGIN will conceive and bear a son, and a STAR will appear blazing at midday to signalise the occurrence… When you behold the star follow it… Adore the mysterious child, offering him gifts with profound humility” (the magi Zoroaster).

Third, let’s consider what they already KNEW -and this is where I think they can be most valuable for us to take as a lesson to imitate.
So what did they know already?
As magi of Zoroaster, they knew there was a god. They knew that there was one god, not many.
But, their coming to the Jews meant that they also knew that there was more to God than what their religion had to offer them.
The Jews had a very “exclusive” knowledge of God
-they claimed that God had worked in their history in a way that He had not worked in other peoples;
-they claimed that God had revealed Himself to them in a way that He had not revealed Himself to others;
-and, they held to a promise of more to come: the Messiah.
For these magi to come to the Jews could not have been any casual act
-it was deeply significant, they were seeking MORE in their knowing and meeting the Lord.

And what did they find?
They found exactly what they were looking for:
God among us, Emmanuel, “the infant king of the JEWS”(Mt 2:2).
Let us also note, however, that they were only able to recognise Him by their faith and trust:
They believed the promise, they had trust in the Lord, and so they recognised Him in this baby lying before them.
They had known Him in part, in the writings of their pagan religion.
They had sought to know Him more, in the God of the Jews.
They found what they were looking for, and “we have come to do Him homage”(Mt 2:2).
And in finding Him, as the text recounted, “they were filled with delight”(Mt 2:10).
Joy, as I have noted before and will note again, joy is a repeated fruit that we see produced in people who meet the Lord.

What of ourselves?
We, if we are Christians, already have the fullness of God -“the Word became flesh”(Jn 1:14).
There can never be another religion for us to seek to find Him more.
BUT we can seek to come closer to Him, as the magi came closer.
If they travelled over a 1000 miles, how much should we be willing to do to fin Him more?
The joy of knowing and loving Him is not automatic:
-the Pharisees were filled with envy, and so just hated Him;
-Herod was too busy with his own concerns, and is just perplexed;
-we might have been Catholic our whole lives, but there is always more we can do to come closer.

Let me close by offering you two specific ways of coming closer to meet the Lord:

First, the free book on your benches (‘Rediscovering Jesus’, by Matthew Kelly).
It’s an easy readable book, as some of you have already been telling me.
Someone was so impressed by the book that he bought a free copy for everyone across our Diocese.

Second, the Alpha course, which we’re starting here Thursday 25th January.
On one level its an introduction to Christianity, something for you to invite a friend to.
On another level, as many people have found over the years, it can be a profound opportunity to meet the Lord at a deeper level.
Each evening has a hot supper, a 30 minute film, and 30 minutes for discussion in groups.