2nd Sunday of Lent, Year B 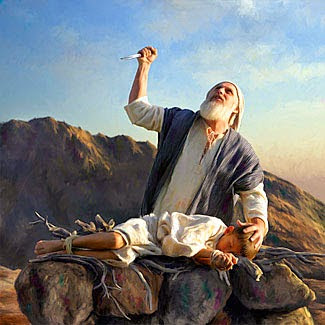 Gen 22:1-2,9-13,15-18; Rom 8:31-34; Mk 9:2-10
In our first reading we heard about Abraham and Isaac, and hearing of how Abraham was asked to sacrifice his son Isaac is always a little problematic. I'll return to that issue in a minute, but I want to first point to the fact that there are three different sacrifices being alluded to in our liturgy today.

First, there is the sacrifice of Isaac. That Abraham was willing to give up his son, even though he loved him dearly (Gen 22:2).
Second, there is the sacrifice of Jesus, the one eternal son of the Divine Father. As we heard in our second reading, what proves that the Father loves us is that He was willing to sacrifice His own Son for us (Rom 8:32).
Further, in the gospel, we heard of how Jesus was transfigured on the mountain, shown in glory to Peter, James and John. And remember the context: the Lord Jesus had just predicted that He would be crucified (Mk 8:31), had just revealed the horror that lay in wait. And He shows them this vision of future glory to sustain them through that horror.
Now, we might note that His predicting His passion, and preparing His disciples for it, shows that it was part of His plan. So it was not just that the Father was willing to sacrifice Him for us, but that it was His loving plan to allow Himself to be sacrificed for us –to be the sacrifice that takes our sins away.

There is a third sacrifice alluded to in our liturgy today, however, one not referred to in our Scripture texts, but one implicit in today’s liturgy:
Our Lenten sacrifices: the prayer, fasting, and almsgiving that we are making. The things we are giving up for Lent.
And this vision of the transfigured Christ on the mountain top is offered to us as a reminder of the Easter glory that lies ahead for all believers making their Lenten sacrifices.

Let me return to Abraham being willing to sacrifice his son Isaac. This seems horrific to us. But why does it seem horrific? After all, many nations and religions in history have sacrificed their children in pagan religions. This, in fact, is the point. We got our idea that child sacrifice was wrong FROM this event. Abraham didn't originally know this. Abraham did not yet know it was wrong to sacrifice his child, the religions around him sacrificed their children, and so he expected to do the same -as the historian and Scripture scholars point out. BUT in this definitive act God taught Him that He, the one true God, did not accept the sacrifice of children. Thus in the centuries after the Jews knew to oppose the child sacrifice that surrounded them, as we oppose it today.

To conclude, there is a Lenten lesson for us here.
On one hand, that God is a god of goodness, not a god of child sacrifice.
On the other hand, that He rewards those who are WILLING to sacrifice to Him, as He rewarded Abraham for his faithfulness by giving him the Promised Land, and countless descendants (Gen 22:17).
You and I need to be willing to make our Lenten sacrifices, to persevere in our giving things up, in our prayer, fasting, and almsgiving of Lent.
It's often not easy to make such sacrifices. So let us resolve to be willing to make sacrifices, as He was willing to sacrifice Himself, that we might have our humanity transfigured in Easter glory just as He showed His humanity transfigured on the mountaintop.
Posted by Fr. Dylan James, Catholic Priest, dual American-British citizen at 06:50