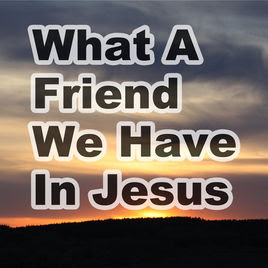 Jn 15:9-17
Today I'm going to speak to you about friendship with Jesus Christ.
Now, it might seem that Jesus being our “friend” is a small and uncontroversial topic, however, it's actually a pivotal issue that sets us apart from our two main competitors in today’s marketplace of religious ideas, those two competitors being Islam and atheism.
Atheism says that Jesus cannot be your friend because God doesn't exist.  Or, even if some 'god' does exist then we can't really know anything much about Him.
Whereas, in Islam, the word, “Islam”, means “submission”, and this sums up a lot of what Islamic thought says about God:
God is not your friend, rather, you are His servant, you OBEY Him.
Linked with this is the notion that God is utterly unknowable in Himself.  We do not know Him, we only know how He has commanded us to live, His commandments.
The Lord Jesus, however, says something else, as we heard.  In that text we heard Him say, “I call you friends”(Jn 15:15).
Yes, He is Lord.
Yes, we submit to Him.
Yes, there is always something “more” to the infinite God than our finite minds can exhaust.
BUT He nonetheless says, “I call you friends”.
Note, in addition, the phrase He utters next, the REASON He says we can be called His friends: “because I have made KNOWN to you everything I have heard from my Father”.
-in Jesus we KNOW God.
You can only have someone as a friend, you can only love them, if your KNOW them.
And the Lord Jesus has made Himself known to us by coming from heaven to earth, and with that He has made known to us EVERYTHING there is to say about God:
the Bible says that Jesus is the one “Word” of the Father(Jn 1:1),
and, as the Catechism puts it, in speaking this Word He has told us all there is to know (CCC 65).
Because of Jesus I can KNOW God;
and, I can call God my friend.
And this is the great gift that the Christian religion imparts.
Now, we might add, that the reason this is so WONDERFUL is that He is a friend beyond other friends, for at least two reasons:.
First, because, He loves me more than other people love me;
He loves me more than I will ever be able to love Him:
as we just heard Him say, He lays down His life for His friends (Jn 15:13).
Second, He is a wonderful friend because He can DO more for me than any other friend.
He can walk on water, feed the five thousand, and so forth.
AND the Church gives us this reading NOW, in Eastertide, so that we might think of His friendship in the light of His rising from the dead.
He is a POWERFUL friend.
To sum that all up:
Atheism says God is not your friend because God is an illusion, or at best unknowable.
Islam says God is your master, but not your friend, again because God is unknowable.
The Lord Jesus claims otherwise.  HE claims He has made God known, that He can thus be our friend.
And His rising from the dead proves the truth of this great claim, and proves the greatness of His friendship.
Posted by Fr. Dylan James, Catholic Priest, dual American-British citizen at 00:30