Food and Sacrifice, 19th Sunday in Ordinary Time, Year B 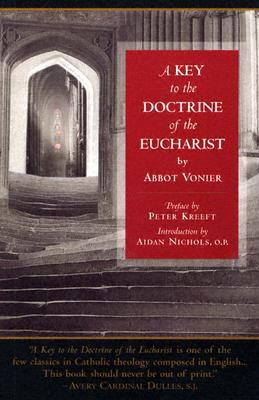 Jn 6:41-51; 1 Kgs 19:4-8
It’d like you to consider a question that I read in a book on the Eucharist (Abbot Vonier, A Key to the Doctrine of the Eucharist, Chapters 4 and 7):
If the priest at the altar was to call down Jesus Christ from heaven, Jesus in His natural bodily state as a full-grown man, and He was to appear, would this be something more or something less that what actually happens in the sacrament of the Eucharist?

It’s a bold image, but Abbot Vonier points out that this would actually be something LESS that the reality we have in the sacrament. Yes, it would be more visually DRAMATIC, but it would lack something that a sacrament has, namely, it would lack the value of SIGN and symbol.
At the level of reality, both would be the same, since the Eucharist is truly Christ:
His Body, His Blood, His Soul and His Divinity (Catechism n.1374), as the true Faith professes.
At the level of PRESENCE both would be the same.
But at the level of sign and symbol the sacrament has something that His body in its natural state does not.

Abbot Vonier notes that every sacrament uses signs in such a way that it connects the past, present, and future.
The past, meaning the events of salvation history, as recorded in the Bible, principally the death of Christ on the Cross.
The present, that we live in, being whatever particular thing that the sign and symbol of the sacrament signifies.
And the future eternal life, that is opened up to us by our connection with those saving events of past.
So, for example, the saving of the Israelites in the parting of the Red Sea is brought into the present by the water of the sacrament of Baptism, opening the door to heaven.

Let me point to just two of the signs that are made present in the Eucharist.

First, there is the sign of food, of nourishment.
If the Lord came down in His body in its natural state then He would be visible as Himself, but He would NOT be visible as food for our souls.
Yet, being our spiritual food is a vital part of what He is to us: Our souls need feeding, and He provides the food in the Eucharist.
Our first reading, with Elijah being fed with miraculous food that kept him going for his 40 day journey is a foretaste of this Eucharistic feeding. The Eucharist feeds us not for a 40 day journey but for the journey towards our eternal home in heaven.

Second, there is the sign of sacrifice.
Christ instituted the Eucharist under the two appearances of bread and wine, and the Catholic Faith articulates that each is fully Him. It is not that a bit of Him is over here and another bit of Him is over there, rather, He is fully present under each form (Catechism n.1377) -what is called the doctrine of concomitance.
But the form of the two different species is a sign of something else, namely, of death and sacrifice.
In a living person body and blood are together.
When they are separated death occurs.
The sign value of separate bread and wine is thus that of the sacrifice of Calvary. And what the Eucharist makes present is the one eternal sacrifice of Calvary, of the Cross, made present and re-presented, offered on our altar.
Again, if He appeared in just His natural bodily state this sign and symbol would not be present.

To sum that up, a sacrament is the Lord being present, but more than just this: it is sign also.
The Eucharist is His Presence par excellence. But it is also a sign, and among those signs are those of (1) His feeding us and of (2) His being the sacrifice that takes our sins away.
And when we meet Him this way in the sacrament His saving events of the past are brought into the present to carry us on to heaven.
Posted by Fr. Dylan James, Catholic Priest, dual American-British citizen at 00:30