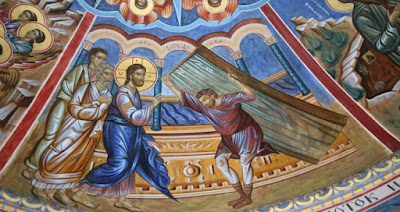 We just heard an obscure Aramaic word, “ephphatha” (Mk 7:34). Earlier this year you might recall I spoke about how there are less than a handful of words in the Gospels that the Early Church considered so precious that it kept not a Greek translation of the Lord’s words, but the actual words used by the Lord Jesus, in the original language He spoke in, namely, Aramaic
The Early Church treasured and kept this word, “ephphatha”, because she sensed that this word, “be opened”(Mk 7:34), applied not just to this individual deaf and dumb man, but actually applies to all of us.
In fact, we can see it as summing up the whole of Christ’s mission on earth.

One of the most basic human experiences concerns the difficulty of relating to God.
We all have an inner desire for something more, something transcendent and beyond, a desire for God -this desire gets smothered in many people, but it remains our most basic human experience:
We were created for God, and we yearn for Him.
The problem, however, is this:
We also experience the difficulty in communicating with Him.
Sometimes I feel unable to come to Him. Maybe I feel unworthy, or too feeble -something seems wrong at my end.
Sometimes, however, it can seem that something is CLOSED at God’s end. Scripturally, this is described in the book of Genesis in the account of the Fall: the Original Sin has left humanity sinful, stained, and shut out from heaven.
I am closed to God; and He is closed to me.
YET I need Him, and I yearn for Him.

Thus the mission of Jesus Christ.
The Lord came among us to open us to God; and to open God to us.
My sins mean that the gates of heaven have been closed to me.
And so Jesus comes and dies for my sins, dies for me.
The symbolism in this regard concerns how, before healing the deaf and blind man, the Lord Jesus “looked up to heaven”(Mk 7: 34).
He looked up to heaven and said, “be opened”.
But, even though His death has satisfied justice,
even though the gates of heaven are opened to me,
even so, there is something IN ME that still closes me from God.
My laziness won’t look to Him,
My selfishness won’t give myself to Him,
My sensual desires close me on myself and my pleasures.
What I NEED is someone BEYOND me to OPEN me.