Alone in the Garden, 27th Sunday in Ordinary Time, Yr B 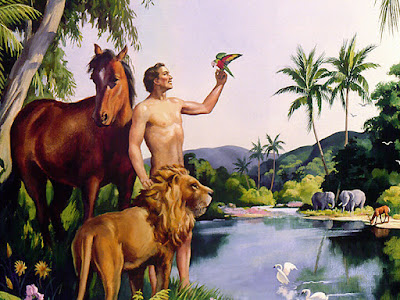 Gen 2:18-24; Mk 10:2-16
Today I’d like us to consider the symbolism of Adam, alone and lonely, in the Garden of Eden.
This image is one of the most profound in the Scriptures, and, as many of you will be aware, it was the starting point for Pope St John Paul II’s famous Theology of the Body catechesis.

Before saying anything else, less the modern skeptical mind get distracted, let me note that we don’t need to take everything in the Genesis account as science.
I am a scientist. I believe in evolution. I could add that the Big Bang theory was invented by a Catholic priest, Father George Lemaître.
Evolution can trace the mechanism of how God made us, not in seven 24-hour days, but nonetheless in the progression of stages.
Genesis similarly describes a progression: the heavens, the earth, the waters, the plants, the animals.
At the end of this progression, and on this science CONFIRMS what Genesis teaches, man emerges, and emerges DIFFERENT from the rest of creation. Science cannot explain the MIND, because there is something in the mind that is beyond science. The Bible DOES explain it: the spiritual soul, symbolically directly “breathed” into man by God (Gen 2:7), making man different from the rest of creation:
Only we have a spiritual soul; only we are made in the image and likeness of God.

And so Adam was alone in the Garden.
Gloriously in the image and likeness of God, but alone, and lonely.

Adam, was alone in the Garden, but he wasn’t meant to be alone.
We are made for community.
We only find completion in another, as Adam found it in Eve, and Eve found it in Adam.

A hugely important part of this is the truth about our bodies, as male and female.
Contrary to the currently fashionable viewpoint, we do not CHOOSE our gender, rather, it is a gift given to us at our conception -male or female.
Even for those who are sadly born with imperfect organs, their gender is not a matter of choice, rather, its a matter of biology. Our gender and our sexuality are received, not chosen (see here and here).
We, similarly, if we are to follow God’s plan, not our own, our bodies are designed to find union in another in a very specific manner. Everything to do with sex is part of God’s plan.
Man only finds bodily completion in a woman, and a woman only finds bodily completion in a man.
And that completion is so significant, that, as we heard the Lord Jesus teach, that it involves a lifelong commitment, and thus He forbids remarriage after divorce.

But even outside of marriage, this image of Adam alone in the Garden is vital:
We are made for community. We are not made for loneliness.
Thus communities like the parish community are so important, with our parish supper tonight, our SVP events for the elderly, our Christmas Fayre, and so forth.
Community is often hard work, as the family is often hard work, but it’s what we are made for.

To sum up:
The image of Adam alone in the garden is powerfully symbolic:
We are different from the rest of creation;
We are made for community;
We find our fullest unity in God Himself.
Posted by Fr. Dylan James, Catholic Priest, dual American-British citizen at 09:52