The Spread of the Church, 6th Sunday of Easter, Year C 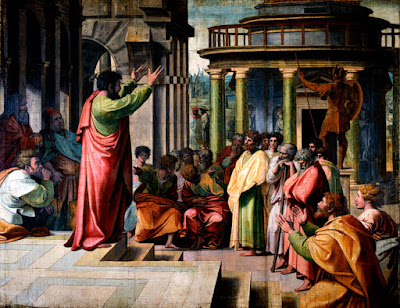 As you may well have noticed, this Eastertide and every Eastertide the first reading at Mass is taken, all through the season, from the book 'The Acts of the Apostles'.
It describes what the Apostles did after Jesus had ascended into heaven.
It describes how they SPREAD the Gospel of the Lord's Resurrection all across the known world
-Starting from Jerusalem, and ending, very symbolically, in Rome, the centre of the Roman Empire, the centre of the then known world.
They had lived with Him, seen His ministry, heard His preaching, watched Him suffer and die on the Cross.
And then, to their surprise, had seen Him after He rose from the dead.
Their encounter with the risen Lord transformed them and He sent them out to “make disciples of the nations”(Mt 28:19),
and everywhere they went they established the Church.
As we just heard, "In each of these churches they appointed elders (the Greek says, 'presbuteros', from which we get our word for 'priest'), and with prayer and fasting they commended them to the Lord in whom they had come to believe."(Acts 14:23).

The simple point I wish to draw your attention to today, however, is the SPEED with which all this happened
-the speed with which the early Church spread.
Because this is one of the SIGNS, one of the proofs, that the Church is OF GOD and not just a human institution.
Yes, she is made up of humans. But the LIFE within her, what makes her truly what she is, is the grace and power of God.
And one of the SIGNS of this is the speed with which God established her initial growth.
This speed was so remarkable that it is a PROOF that the founder of the Church is who He claimed to be, namely, proof that Jesus is God.
As the First Vatican Council taught in 1870AD, this is one of the "motives of credibility" for believing in Him: "The Church itself, by its marvellous propagation... is a vast and perpetual motive of credibility, and an irrefragable witness of its own Divine legation." (First Vatican Council, De Fide Catholica, c.iii.)

The early Church had a great many things against her.
She faced PERSECUTION by both the Jewish authorities in Palestine and the Roman imperial forces elsewhere.
She faced RIDCULE from the sophisticated Greek philosophers for following an unsophisticated Galilean preacher, and, worse still to the Greeks, preaching not only the ‘resurrection’ of this man but of ALL men (whereas Greek philosophy sought to escape the captivity of the body -as they saw it).
She taught an UNPATRIOTIC rejection of the national pagan gods.
Perhaps toughest of all, she taught a demanding MORAL & sexual code to a permissive pagan world.
And, unlike some religions, she taught peace and did not seek to spread herself by warfare.
For all these reasons, human expectation would have said she would fail.

Yet, on her first day, at Pentecost, 3000 were added to her number.
In the lifetime of the apostles she spread throughout Asia and to Rome.
By the mid-second century St Justin could observe that,
"There is no race of men, whether barbarians or Greeks, among whom prayers are not offed through the name of the crucified Christ". http://www.goodcatholicbooks.org/fathers/justin-martyr.html
And by the year 313AD in the Edict of Milan, even the emperor himself submitted to the faith.

How did this happen? Not by the work of men. But by the grace of God.
And, as we hear the Acts of the Apostles read to us through this Easter season, let us recall and give thanks for the power of God being manifested in this way.
Posted by Fr. Dylan James, Catholic Priest, dual American-British citizen at 00:30