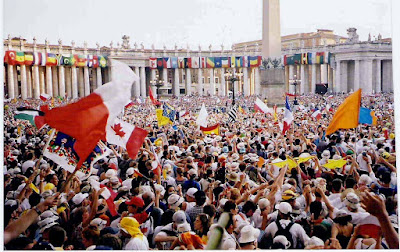 Today’s feast of St Peter and St Paul gives us a great occasion to reflect on what it means to be Catholic, to be part of the UNIVERSAL Church, to be part of something bigger than we are.

This concept of BELONGING is very counter-cultural.
Lots of people today talk about the LOSS of a sense of COMMUNITY,
and almost every single community organisation in the UK is in numerical decline.
There is a very weird contradiction here:
people talk about community, and mourn its loss,
but few seem to recognise the things we need to DO to belong:
-for example, I need to commit, to commit to something other than myself.
The modern mindset is very individualistic:
I do my OWN thing, I think my own thoughts
-and no one else can tell me what to do.
One of the problems with this, however, is that it’s a very LONELY approach to life
-just me figuring out life on my own,
which is lonely when you’re YOUNG with your whole bewildering life ahead of you,
and lonely when you’re OLD and you’re facing whatever comes next.

The bigger reality that we belong to as Catholics stretches in two directions: space and time.
St Paul typifies the thing of “space” because he was the great missionary. Chosen by Christ in a special vision and sent to take the truth about Jesus Christ to all the gentile nations -in his own brief time he went all around the Mediterranean basin.
He symbolises the universal “Catholic” Church in that the Church has a mission to spread to every corner of the world -we tend to think that we are universal now because we are spread on every continent, but our real sense of being universal is that BELONG everywhere, we have a MISSION, a sending by Christ, to BE in every place, to bring ALL people into the unity of His Catholic Church.

The other dimension, time, is typified by St Peter, and expresses our Catholicity in a different sense.
-the modern mindset often just lives for today,
but the Catholic mindset finds meaning in our today by seeing how it links to the past and the future.
-the future, where Christ will come again in glory and take His faithful home;
-the past, where Christ came in Galilee and revealed the truth.
The Church belongs everywhere because it proclaims a set of truths that belong everywhere.
The Church belongs everywhere because it is rooted in Christ.
St Peter, the first pope, was the first entrusted with that teaching mission.

Before I conclude, let me note that the media frequently tries to point out the sins and failings of the members of the Church. Sometimes, we can feel embarrassed to be associated with such people by belong to the same Church as them, especially when its clergy.
The Church, in every age, needs to purify herself of filth, “ecclesia semper reformanda est” (said Vatican 2).
The members of the Church are human, we are sinners, but the reality that constitutes us is something more, something Divine -and THAT, not sin, is what we belong to by being Catholic.