Winter in the Church: An Analogy 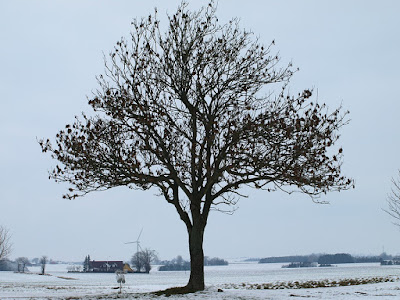 The Faith Movement has a monthly meditation. I wrote this one, for December:

We are now, in terms of weather, in what is usually the grimmest period of the year.  There are many ways in which this might seem a metaphor for the state of the Church today.  In winter, there are few leaves on the trees, and the few there are passing remnants of the summer.  In the Church, there are fewer Catholics than there used to be, and it can sometimes feel as if the few here are remnants of the past rather than tokens of a future.  I want to dwell on this metaphor to consider the hope that lies beneath the apparent gloom.
The death of winter is never terminal.  The death of winter is always a step towards spring.  The death of winter, in fact, is never as dead as it seems: under the ground, out of sight, nature is working and moving to make possible the new growth that will come with spring.  If the old leaves and mulch didn’t decay in winter, if the worms and bugs didn’t keep working through the cold of January, then the warmth of April would never produce the growth of spring.  This gives us an important, if un-glorious, image of our own apostolate in the Church in our day -we must be the worms and bugs that will create the groundwork to enable more a visibly fruitful apostolate in the future.
To shift from metaphors to history: If our Scottish and Welsh readers will indulge me, our English Catholic past gives us at least two examples for us.  First, we might recall how the pagan Vikings came and conquered the flourishing Catholic faith of Saxon England. It seemed that not merely England but the faith itself was lost.  The monasteries and nunneries were burnt and ruined, the churches desecrated, the bones and relics of saints destroyed. Little could those who lived through those days have envisaged that the splendour of Catholic medieval England was still to come!  Little could they have imagined that in a few generations those Vikings would be converted to the Lord.
We recently celebrated Newman’s canonisation, and many will have recalled his hope-filled Second Spring sermon.  My second example, however, draws its lessons from what might be called the ‘Second Winter’ that Bishop Challoner lived through.  Challoner lived in the 18th century, after the time of the glory of the reformation martyrs but before the time when the numbers of Catholics began to increase.  For 40 years he laboured as vicar apostolic, a time period when Catholics statistics were only ever on the decline. The law of the land allowed him and his followers to live, but the establishment stacked everything against them.  Far from being a figure of despair, however, Challoner was determined and visionary. He established patterns of devotion, and books to sustain them, that not merely kept the Old Faith alive but developed it to new counter-reformation heights.  He only ever worked with small numbers of people, but he kept going. He created apostolic centres and pastoral structures that built a new foundation, a foundation that made the likes of Newman and his Second Spring possible. It seems to me that we, today, can chose between spending our time weeping that Newman’s Second Spring didn’t produce a Second Summer, or we can choose do our little part to prepare for a third spring we can’t yet foresee.
The Catholic Church in England went through a winter under the Vikings, under the Protestants, and is in another winter now.  The Catholic Church is Scotland likewise saw winters before St Columba and while Mary Queen of Scots lost her head. Few people like to live in winter, but it would seem it is our lot.
To live in ecclesiastical winter takes both faith and hope.  It takes faith to believe that the truth and the world is different from what those around us would have us think.  It takes hope to continue working amidst small numbers and worshiping amidst declining and elderly congregations. Both only come, and can only bear fruit in love, when we trustingly look to the Lord.  If we do, we can come to see reality with “the eyes of faith”, to “see all things with the eyes of Jesus”(Lumen fidei n.60).  He is the one who told us that His Kingdom works unseen, like a seed under the ground (Mk 4:27).  It is working in the winter, even if it is only seen come spring.  Let us ask the Lord to fill us with the faith and hope, and maybe the humility, to be the worms and bugs that work through the winter, and not despair that we’re not green shoots of spring.