Absence from the Lord making our love grow stronger? Corpus Christi, Year A 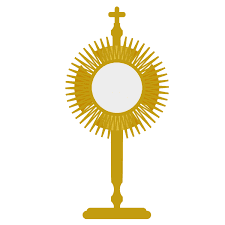 Deut 8:2-3,14-16; Jn 6:51-58
We all know the saying, “Absence makes the heart grow fonder”.
Today, I’d like to consider the saying with respect to the Holy Eucharist, because for almost all of us, we’ve been deprived of the Eucharist for 3 months now.
In that time, has our Eucharistic Lord GROWN in importance in our lives, or diminished?
Because there is also another saying, "Out of sight, out of mind".

In contrast, I am aware, there are many for whom being deprived of our Eucharistic Lord has done the reverse:
It’s made you realise what a treasure His Presence is;
It made you yearn for Him MORE.
But, I would suggest to you, that even if you THINK that you’re in this second category, it might be worth examining ourselves on this point:
HOW deeply true is it?
Have I enjoyed Sunday mornings without Mass?
Has the comfort and ease of doing less become a habit.

Let’s think Scripturally for a minute.
In our first reading today, Year A in the cycle, we heard words of Moses addresses to the people.
He was speaking to them about their time wandering in the desert.
He told them how the Lord had tested and tried them.
The Lord tested and tried them in order to make them FEEL their need of Him:
“He humbled you, He made you feel hunger”(Deut 8:3).
For many in our society today, this whole crisis has done something similar, has made us revaluate our priorities.
What is the TRUE bread we need?
What are the things that REALLY matter in life?
Is it the money we’ve lost?
Is it the shopping at H&M or M&S that has been denied us these months?
Or, is it the Lord? Is being deprived of Him, in the Eucharist, the most vital thing these past months?

Back to our scripture text:
After Moses referred to the fact the people had been tested, He reminded them that God didn’t just test them, rather, after the testing, in the midst of the testing:
“He fed you
with manna that neither you nor your fathers had known.”(Deut 8:3)
And the conclusion of this testing and feeding?
“To make you understand that man does not live on bread alone but that man lives on everything that comes from the mouth of the Lord” (Deut 8:3).

This has been a hard time for our nation,
and it isn’t over yet.
But, our Faith promises us,
and words from many of you have told me,
The Lord has sustained us though this,
and WILL sustain us through this.
He has fed us in other ways,
though feeding us in a way that will hopefully have had us YEARN for Him even more fully in that COMPLETE Presence and food that is HIM:
“The bread I shall give you is my flesh, for the LIFE of the world”(Jn 6:51).

To conclude, we are slowly emerging from the lockdown.
The church, some churches, will be re-opening for prayer, at least partially this week.
Has our absence made our hearts grow stronger?
Let us resolve that it will be so.