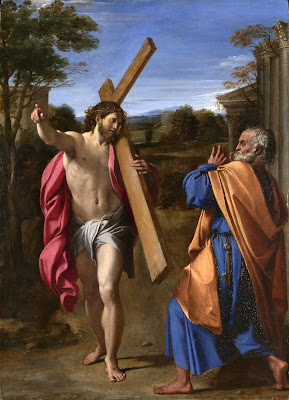 I don’t know if you’ve every wondered what size shoe Jesus takes, but the answer is a size 10, and the reason we know this connects an ancient Tradition with the prophecy in today’s Gospel.
Many of you will be familiar with Domine Quo Vadis account. This isn’t recorded in the Scriptures but we find it written about in a non-canonical source called the Acts of St Peter. It describes how, near the end of St Peter’s life, there was a persecution of the Christians in Rome. And Peter fled. He fled out of the city along the Appia Antica, the ancient road out of the city. And as he was hurrying along he saw the Lord Jesus: Jesus was coming the opposite direction, carrying His cross, heading to Rome. Peter asked Him, ‘Domine Quo Vadis’ [Where are you going Lord?]. To which the Lord answered, ‘I am going to Rome, to be crucified again’. The vision vanished, but left His empty footprints on the rock. Peter was called to fill those empty footprints. Peter knew from this that he was called to return to Rome himself, to suffer and die for the Lord, as the Lord had prophesied so many years previously on the side of the Lake of Galilee. And so Peter died Saint Peter.

The gospel account we heard taught us a lot about St Peter’s call. He was established as the shepherd over the other shepherds: the prince of the apostles. He was called to suffer martyrdom: to be taken where he would rather not go. He was, in all, called, in those final words, to “follow me”.
But, if Jesus called him to so much, what did Jesus ASK him in His questions of him? Only one simple thing. A simple thing that was so important He asked it three times: ‘Do you love me?’

What of us? Do we love Him?
Why should I love Him? Well, the answer to that might lie in why Peter loved Him.

The answer to why Peter loved Him lies, at least in part, with the change that the Resurrection brought about. A change that indicates why it is the RESURRECTION and not only the Cross that is what enables us to carry OUR cross.
Before: Peter was weak, he ran away when Jesus was arrested, he denied Him three times.
After: he was bold, strong, as we heard in the first reading: he was ready to be whipped and suffer for Jesus.
We know that Peter was strong because of Grace, but I think there is another reason:
Peter now knew Jesus in a way that he had only imperfectly known Him before.
Peter had an experience of Him as something more.

These same reasons are why I should love Him. Are why I should accept all the little sufferings, and big sufferings, that my call to follow Him involve. To be good, to be patient, considerate, thoughtful of others, to accept my illnesses and weaknesses, to offer them as a prayer to the Lord.

So, how do I know that Jesus takes a size ten shoe? Because I take a size ten shoe. And, like you, I know that I am called to fill the shoes of the fisherman: to suffer as he suffered. Because, like Him, I know my following of the Lord is founded on that same question, ‘Do you love me?’

____________________________________
The full text of the account in The Acts of St Peter (XXXV):
“And as they considered these things, Xanthippe took knowledge of the counsel of her husband with Agrippa, and sent and showed Peter, that he might depart from Rome. And the rest of the brethren, together with Marcellus, besought him to depart. But Peter said unto them: Shall we be runaways, brethren? and they said to him: Nay, but that thou mayest yet be able to serve the Lord. And he obeyed the brethren's voice and went forth alone, saying: Let none of you come forth with me, but I will go forth alone, having changed the fashion of mine apparel. And as he went forth of the city, he saw the Lord entering into Rome. And when he saw him, he said: Lord, whither goest thou thus (or here)? And the Lord said unto him: I go into Rome to be crucified. And Peter said unto him: Lord, art thou (being) crucified again? He said unto him: Yea, Peter, I am (being) crucified again. And Peter came to himself: and having beheld the Lord ascending up into heaven, he returned to Rome, rejoicing, and glorifying the Lord, for that he said: I am being crucified: the which was about to befall Peter.” http://www.earlychristianwritings.com/text/actspeter.html
The presence of the Apostle Peter in this area, where he is supposed to have lived, appears to be confirmed in an epigraph in the Catacombs of Saint Sebastian that reads Domus Petri (House of Peter). A later epigram by Pope Damasus I (366–384) in honour of Peter and Paul reads: "You that are looking for the names of Peter and Paul, you must know that the saints have lived here." There are two footprints on a marble slab at the centre of the church which are a copy of the original slab that has now been moved to the nearby Basilica of St Sebastian at the catacombs.