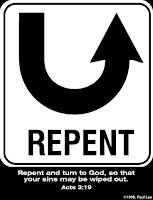 Lk 13:1-9; 1 Cor 10:1-12; Ex 3:1-15.
Sometimes Jesus says nice comforting things; sometimes harsh and worrying things. Sometimes we hear Him say things like, “Come to me all you who labour and are heavy laden and I will give you rest” (Mt 11:28); but sometimes this same Jesus says things like the harsh words in today’s Gospel, “Repent, or you will perish”.

Now, I am not repeating this passage to you just to frighten you; and the Church does not give us these readings just to frighten us. And Christ did not warn us just to frighten us.
The same Jesus who sometimes said what seemed easy things at other times said tough things because BOTH types of things were an expression of His love for us and for the people He was originally speaking to.
When a mother or father warns a child that if they put their hand in the fire they are going to get burnt the parent is not saying this out of some twisted desire to worry and panic the child –rather, the parents is saying this because the parent knows the very real danger that the child is in, even though the child does not know or understand the danger that the child is in.

The people that Jesus was talking to didn’t think they were in danger: They thought that they were saved; they thought that as the Jews, the Chosen People, they had nothing to worry about. But Jesus told them that they did indeed have something to worry about because their lives were not bearing fruit. Like the fig tree in that parable, unless they started to bear fruit they would be cut down and thrown on the fire; God would wait a bit longer, but eventually time runs out for each of us and the question will be: did you bear fruit?

God does not force salvation on any of us: He has made us free; He has made us capable of rejecting Him by our indifference to His love.
Jesus warns us because He knows that it is easy for us to fool ourselves, just as the people who He was talking to had fooled themselves. We can fool ourselves that none of this applies to me: I don’t sin, God wouldn’t punish ME. But Scripture says it does apply to me: “If we say we have not sinned, we make God out to be liar, and the truth is not in us”(1 Jn 1:8-10).
Bishop Christopher reminds us of the need to go to confession during Lent. It’s a much needed part of a repentance and forgiveness. As he said in one of his Lenten pastoral letters, "Judging from the very small number of people who present themselves for reconciliation, many of us need to do a truth assessment about ourselves as a matter of some urgency"(Lent 1998).

(pause) God warns us because He cares for us. In fact, we could say that this is the foundational theme of this week’s readings. Right through the Bible, from the garden of Eden to the apocalypse, any warning from God is ALWAYS preceded by a revelation of God's love and care.
A care shown in today's readings in the way that the Lord sought to rescue His people from Egypt: He said to Moses, "I have seen the miserable state of my people... I mean to deliver them... to a land flowing in milk and honey". A care shown in the parable of the fig tree, where the gardener gives the tree another year to try and produce fruit.
The warnings only come because, despite the repeated displays of God's affection for us, we fail to respond.

One of the ways a response can be awakened in us, is the warnings we find today. A kind of SHOCK treatment. But we must remember that the only purpose of the shock is to remind us that Jesus came to SAVE us from perishing, a salvation that He offers to all of us, IF only we would turn to Him. If we always keep in mind that the Lord is rich in mercy, full of compassion, that He has already shown His patience with us, then we will not find it too hard to do what He asks, to look at the lack of fruit we have produced, and respond to Him with love and repentance. Let the prayer of publican be ours: “Lord, have mercy on me a sinner”(Lk 18:13).
Posted by Fr. Dylan James, Catholic Priest, dual American-British citizen at 00:01