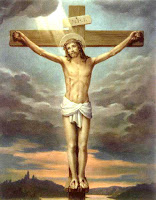 The simple answer to this question is: they did “that” to Him because they hated Him. They brought Him to Pilate, demanded that Pilate crucify him, they mocked, insulted, beat him, and spat on him –because they hated Him.
And why did they hate Him? As we just heard how Pilate asked, “Why? What evil has He done? I have found Him guilty of no crime.” (Lk 23:22). As we’ll sing on Good Friday,“Why? What has my Lord done? What makes this rage and spite? He made the lame to see, He gave the blind their sight.”

The central core of the reason that they hated Him was clearly expressed in His trial before the Sanhedrin, as we heard in that reading of the Passion. We know from other passages in the Gospels that the chief priests and Pharisees were jealous of Jesus because of the huge crowds flocked to Him, that they argued with Him because His teaching fulfilled the Law of Moses in a way that contradicted their own interpretation of the Law, and we know that they had contempt for Him because He was of humble origins -a Galilean, from the country.

However, there was more to Jesus than the description of those simple facts conveys: there was something about Jesus that demanded a reaction from the people who encountered Him: sinners repented, sickness was driven out, demons were exorcised, fishermen left their boats and nets by the shore of the sea to follow Him, crowds flocked to hear Him teach.
But, the reaction to Jesus was not always positive: the Gospels also record times when the crowd left Him because they did not accept His teaching, because they said "this is a hard teaching”(Jn 6:60). There was one ‘hard teaching’ in particular that demanded a reaction either in favour of Him or against Him: His claim to be "the Christ", "the Son of God", to be the Lord God Himself: the great “I AM”(Lk 22:70 c.f. Exodus 3:14). Every other claim He made was rooted in this ‘hard teaching’. This demanded a reaction; and this caused the reaction that led to His crucifixion.

The reaction that led to His death is, on a deeper level, the either-or reaction this is demanded of each one of us in our encounter with the Lord God. When we encounter the Lord either in prayer, or in the needs of our neighbour, or in the minute by minute moral demand that we live not in selfish mediocrity but live a life worthy of God and offered to God: when we encounter the Lord we either love Him or we reject Him in sin. And so the rejection of Christ on the cross is the perpetual sign of the rejection that each of us daily make of Him in our sins.

And this, paradoxically, is why the cross is OUR salvation and not only the salvation of the Jews. Because Jesus died because of MY sins, and particularly because He CHOSE to die for my sins, because He chose to enter this world and submit Himself to death for our sakes: because He died for MY sins He thus died as an act of love for me, to save me.

So, when my nephew gets older he will hopefully mature his question from, “Why did THEY do that to him?", to, “Why did WE do that to Him?”, to, “Why did I do that to Him?” And He will know that the shame we might otherwise feel from having done this to Him is taken away by acknowledging what we have done:
like the thief on the cross who became “the Good Thief” by turning to the Lord, admitting His guilt, and receiving the promise: "today you will be with me in Paradise"(Lk 23:43).
Posted by Fr. Dylan James, Catholic Priest, dual American-British citizen at 00:04

Your blog has been recommended to us as a interviewee's favorite blog!

We would like to do an interview with you about your blog for Blog Interviewer. We'd like to give you the opportunity to give us some insight on the "person behind the blog."

It would just take a few minutes of your time. The interview form can be submitted online here
Submit your
interview