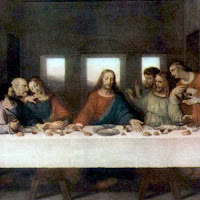 There are a number of unusual things that we do as a part of the Triduum liturgy over these three days -things that are unusual, yet have always felt right to me as I grew up with the liturgy. One of those things in the procession at the end of tonight’s liturgy, when we remove the Blessed sacrament from the tabernacle and take Him to another place: the altar of repose.
This feels right when we return tomorrow on Good Friday, because the world that stands empty at the death of Christ is mirrored in the church’s emptiness of the tabernacle.
But even more than this, the symbolism seems right in that tonight is about Jesus leaving us, Jesus leaving us to go and die, Jesus leaving us to go from the comfort and intimacy of the Last Supper and the Upper Room to go to the Agony in the Garden of Gethsemane.

Tonight's liturgy is very much about Jesus leaving us, and so it is only suitable that the liturgy should end with Jesus in the Blessed Sacrament leaving the tabernacle. And it is only suitable that the liturgical tradition calls on us to "watch" in prayer before the Blessed Sacrament, "watch" in prayer as the apostles were called on to watch in prayer in the Agony in the Garden.

Tonight's liturgy, as we focus on Jesus leaving us, reminds us of what Jesus left us to remain with us when He was gone, and each of the three things that tonight’s liturgy focuses on is a different aspect of the gifts He left us "to reveal His love", as the opening prayer tonight's Mass said.

There were three things He gave His apostles at the Last Supper: the Mass, the Priesthood, and the New Commandment.
The first of those gifts, namely the Mass, was itself a twofold gift. In one aspect it is the gift of His Presence: His Body and Blood, His Soul and Divinity, present in the Blessed Sacrament, present to be the food for our souls. While the other aspect of that twofold gift of the Mass was the gift to us of the perfect prayer, namely the sacrifice of the Mass. In both of these aspects His gift was that He was to remain with His Church even as He was leaving it.

The second of those gifts, the Priesthood, is the automatic corollary of the gift of the Mass. If the Mass is to be a gift from Christ to us, then it must be a gift that is received, not something that we make ourselves -and the fact that the priesthood is received from another priest from another priest who received it from a priest who ultimately received from an Apostle who received it from Christ -this is the guarantee that the Mass is our gift from Christ, and not merely our own invention. The Priesthood is a very particular form of Christ remaining with His Church.

The third and last of those gifts, the New Commandment, was given at the Last Supper: “A new commandment I give unto you, that you love one another as I have loved you”(Jn 13:34) –not merely to love, but to love as He has loved us. And while these words are not in tonight’s liturgy, they are expressed in the loving humility of the foot-washing that is in tonight’s gospel and is re-enacted in the ritual tonight. They are expressed also in the fact that the liturgy specifies that gifts for the poor are to be brought up in the offertory procession of this night -and tonight the SVP will be bringing forward offerings of clothing of the homeless.

These three things are the pivotal ways in which Christ remains with us: in the love of the New Commandment; in the Priesthood that gives us the Mass; and in the Mass itself. Christ left this threefold gift that night. And He went from the Upper Room to the Cross, to the Cross, to the death that was itself that threefold act of love, of Priesthood, of the Mass. As we think of how He left that room to go to the Garden, let us in our hearts and minds accompany Him, and recall what He left us when He went.
Posted by Fr. Dylan James, Catholic Priest, dual American-British citizen at 19:30