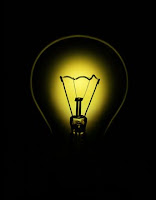 on Mt 5:13-16.
I don't know what you think when you hear that phrase in today's gospel, "You are the light of the world". I'm sure some people think, "Yes, I'm a lamp burning brightly", but I often feel more like a dead light bulb, or a candle flickering in the wind. Because I know I'm a sinner, and that my sin obscures my ability to be a light.

But Jesus knew we were sinners when He called us to be the light of the world.
Jesus said in the gospel that we must be light, "so that, seeing your good works, they may give the praise to your Father in heaven", and I think that it is in this we see a key as to how we are to be light to the world:

If people were supposed to see us do good actions and think that we were great ourselves, then maybe we'd have to give up. But the fact that the credit for the good is supposed to go to God, reminds us that it is actually from God, and from Him alone, that all grace and goodness comes.

Many of us will know times when we've been surprised at the good that has been done by someone we might not have expected, we can sometimes even be surprised by the good we do ourselves -and this is one of the ways that we can see that there is a source of goodness that comes from outside of us, from God.

People that see us and know us, know that we are weak, know that we are sinners.
So hopefully, when they see us doing good they may realise that the strength to do so comes from God, and they may be led to a greater faith in God.
And so our good deeds should not be self-glorifying, but God-glorifying.

If we think that we are weak, then we'd do well to look at the Scriptures.
Time and time again we see in the Bible, how when God chooses people, He chooses weak people. And He chooses weak people because it in them that His power can be more obviously seen as God's power and not human strength.
Moses was so inarticulate that he had to get his brother Aaron to speak for him, and yet through God's power he led the Children of Israel to freedom.
David was the youngest and smallest of his brothers, and yet through God's power he defeated Goliath and became a great leader of his people.
The 12 apostles were constantly making mistakes, slow to understand. Peter himself denied Jesus three times. And yet through them God established His Catholic Church across the world, the longest lasting institution in human history.

In our own day we too have had great examples of God working through weak people. Take Mother Teresa of Calcutta. Physically she was no-one at all, and yet few would deny the great goodness worked through her. It was largely through seeing the action of God in her that the famous Malcolm Muggeridge came to have faith. And there are many less famous examples, people, I am sure, that we have known ourselves.

God has chosen US too, He wants us to be His witnesses, His light.
The title that Christ gives us is one of great honour because it is one He uses of Himself, He said, "I am the light of the world". And by giving us that title Jesus was identifying us with Himself. He is calling each one of us to become other Christs, to become Christ Himself.
While we know we don't have the strength to be such lights ourselves, we do have the strength in Him.
As scriptures says, his grace is sufficient for me; and with His grace we can do all things, we can even be light to the world.
Posted by Fr. Dylan James, Catholic Priest, dual American-British citizen at 00:58