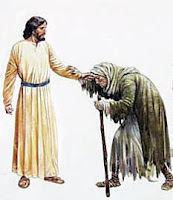 Mk 1:40-45
Today s the second Sunday in a row that we’ve heard of Jesus curing the sick – so I thought that today might be a useful time for us to think about our own attitudes to the sick, and to ourselves when we are sick. The Lord Jesus’s attitude to sickness and people who were sick was in sharp contrast to the attitude of the cultures that surrounded Judaism. In the ancient world it was common for people to leave the widow and orphan, the weak and the sick to die. There was something shameful seen in sickness and weakness. And this is part of the reason why the ancient Greeks practiced things like Euthanasia, killing off people in old age and illness.

When God was forming His chosen people, the Jews, He formed them to have a different attitude to the weak. He told them that they must care for the poor, the stranger, the widow and orphan. Further, when the Messiah came He strongly condemned the notion that the sick should be seen as cursed by God. Jesus spent a huge amount of His time going around caring for the sick having compassion on them. Because He valued them, He didn’t dismiss them because they were weak and sick –He loved them all the more.

Wherever Christians have gone in the world, bringing the good news of evangelisation, what they have also brought is a care for the weak. Many of the missionary orders in Africa went FIRST with hospitals and basic humanitarian care. Still, today, the predominant work of most missionary orders, where most of the money we donate goes, is spent on care like hospitals. More specifically, we can think of Mother Teresa spreading the Gospel by caring for those people in Calcutta that others had deemed to be ‘untouchable’. But none are untouchable to God; none are beyond His care and love.

But what can we say of the attitudes of our own time? What of the secularising Western world? How do we value people?
Sadly, our culture tends increasingly to value people for very superficial reasons. We laud the beautiful, the healthy, the wealthy, those who dress with glamour. But how often do we laud people just for what they are? Does our society value goodness in people as much as we value these externals? Sometimes, but not enough.

This is the context in which our modern world is thinking and speaking of Euthanasia, of the so-called ‘mercy killing’ of the sick and elderly, of legalising assisted suicide. It is because we only value people for their externals, for their beauty and health, that we think that their lives aren’t worth living if they lack these external goods. But this is no way to measure the value of a person, it is no way for us to measure the value of someone else, and it is no way for us to measure our OWN value –sadly so many people who come to think that their own life has no value only do so because that is what others around them imply.

Euthanasia, isn’t just something that concerns other people –it’s an issue most us will have to face, either for ourselves or for members of our own family. I remember when my own Grandpa was dying, in Chicago, I had to examine with my Mom the treatment he could be given. What he could have, what the doctor’s didn’t want him to have, what was morally right for him to have in the eyes of God’s Church.
We had to face all this, and think about it when we were already starting to grieve for the father and grandfather we loved. Which is why I’m glad that we insisted that he have everything. As a result he died with better care, better pain relief, and a sense that we hadn’t let him down.

It was important, because my Grandpa was still a human being, he still had value and dignity, even though he was old and sick, and dying. Jesus, when He walked the earth of Palestine cared for the sick, because He saw their value even in sickness. And as Christians we are called to do the same. To see that every human person has value, no matter how weak. It means never saying, or even implying, “Your life isn’t worth living”. That means that I can’t judge other people’s value by their wealth, health and beauty. And it means that I can’t judge my own value by my wealth, health, or beauty.
And if we ourselves live in a way that makes these real values obvious to others, then maybe our culture will also come to see the value of the weak, as Jesus saw their value, and maybe those campaigning for euthanasia might just come to see a new set of values.


In this weekend's newsletter the following notes were enclosed:

• What is euthanasia?
Euthanasia is an act or omission that deliberately causes someone’s death. It is sometimes mistakenly called ‘mercy-killing’ because it ends someone’s suffering.

• Are only Christians against euthanasia?
No. Many non-Christians see the moral evil involved in euthanasia. Human reason alone is capable of discerning this truth. This is one of the reasons why we should campaign to have the law prevent euthanasia.

• What is the difference between ‘letting someone die’ and euthanasia?
When we let someone die we are acknowledging that there is nothing more that we can do for them, except ease their pain and provide similar comfort. We do not intend to hasten their death. In contrast, euthanasia intends to cause death.

• What is the ‘Quality of Life’ approach to euthanasia? Why is it wrong?
The ‘Quality of Life’ argument claims that someone should only live if they possess a certain quality of life. Those who follow this approach think that euthanasia should be practised on people who lack such a quality of life.
This approach is wrong because it reduces human life to questions of economic efficiency, physical beauty, pleasure, and materialism. It takes no account of the spiritual dimension of human existence. In short, it reduces us to the level of animals. In contrast, we hold to a higher view of human life. Our dignity as humans means that life itself is worth living.
Also, it is impossible to specify what exactly defines and measures someone’s exact quality of life, thus, in practice it is a criteria so vague that it will lead many people to be euthanised who do not wish to be.

• What is the ‘Quality of Treatment’ approach to caring for the dying?
This aims to always give the best quality of care possible to the sick. But it acknowledges that sometimes the best treatment means not using every possible procedure. When a procedure causes a burden that exceeds the gain hoped for then it cannot be sensibly seen as a good ‘quality of treatment’. We still always want someone to live, but we don’t give a person a treatment that is of no real benefit to them. Our aim is not to kill, we are simply letting the person die. This is the Catholic approach to end of life decisions.

• What about withdrawing tubes that provide water and food?
Often when someone is ill in hospital they will be fed through tubes. Contrary to the opinion of some, the Church teaches that this is ordinary care because the right to food and water is a basic human right. The withdrawal of feeding tubes in the case of Tony Bland was widely condemned by the Catholic Bishops in the UK. Pope John Paul II has taught definitively on this matter.

• Who can I turn to if I see someone I love suffer?
In prayer we can turn to Our Lady, the Blessed Virgin Mary, who watched her Son suffer and die on the Cross. She is the Mother of the Sorrowful.
Also, in activity, we can think of Veronica who wiped the face of Jesus as he carried his Cross.

• Who can I turn to if I am suffering myself?
In all suffering we should look to Christ on the Cross. There we see that he is with us in our pain. We see the promise that we, like him, can triumph over pain if we unite ourselves to him. In the offering of his prayer as a sacrifice to the Father we can find a positive use for our own suffering. In him we can find the strength to endure the cross. In his suffering and death he has given dignity to our suffering and death.
Posted by Fr. Dylan James, Catholic Priest, dual American-British citizen at 00:51