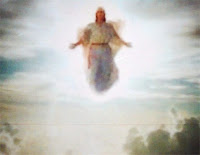 Mk 2:1-12
I'm only going to give a brief homily today because at the end of Mass we have an appeal from the SVP.
I want, briefly, to comment on the use that we just heard Jesus make of the title "the Son of Man".
To us, that title probably means nothing. Or, if we think it means something we might mistakenly think it simply means that Jesus was saying that He was a man, that He was human. But that would be very ODD thing for Jesus to claim because it was obvious He was human!
To the Jews who heard Him, however, this title "the Son of Man" would have been a title they were familiar with. More specifically, it was the title that was associated with the expectation of the coming Messiah. So, for example, the prophet Daniel in the Old Testament refers to one coming on the clouds of heaven (Dan 7:13). This title, "the Son of Man", was obscure in its meaning, but nonetheless was loaded with messianic expectations. And, for Jesus to use this title to refer to Himself was an obvious, even if not yet fully explicit, claim to be the Messiah.

Beyond this, however, Jesus added another claim, as we heard. He claimed that He has the authority to do something that Jews clearly knew only GOD could do, namely, He claimed "the authority on earth to forgive sins”(Mk 2:10). And with this claim He thus claimed to be God.
Ultimately, it was for this claim, the claim that He was God, that they put Him to death. During the Sanhedrin trial of Jesus, both of these claims appear together: the Jewish high priest asked Jesus: "Are you the Messiah, the Son of the Blessed one?" Jesus responded, "I am: and you will see the Son of Man sitting at the right hand of Power, and coming with the clouds of heaven” (Mk 14:61).
They put Him to death for this claim, but He proved His claim by rising from the dead.
And it is because of the truth of that claim that He can forgive our sins today, as happens every time we go to confession and we are forgiven in His Name.
Posted by Fr. Dylan James, Catholic Priest, dual American-British citizen at 00:53