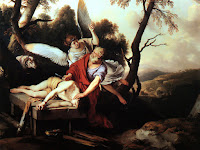 Gen 22:1-18; Rom 8:31-34; Mk 9:2-10
Who here would be willing to sacrifice their son? No one.
But, if we are to understand Abraham, and the significance of Abraham being willing to sacrifice his son Isaac, we’d do well to ask ourselves WHY we wouldn’t be willing to sacrifice our sons.
After all, for much of human history pagan religions had human sacrifice, and it seemed ‘normal’ to them. Why does it not seem normal to us?
You might first say that such a thing is repugnant to ‘reason’, and it is.
But I would like to point out that it is a ‘reason enlightened by Faith’ –it is our Judeo-Christian Faith that has taught us that human and child sacrifice is an abomination.

Let us cast our minds back to Abraham, in particular, to Abraham before this incident. We need to do this if we are to understand how this event was both a test of Abraham, and, a revelation of what God is like.
Abraham did not yet truly know the Lord our God because God was only beginning to make Himself known to him. In particular, Abraham did not know that the God who had called him was a God unlike other gods. He did not know that He was a God who found human sacrifice an abomination. So, when the Lord God asked him to sacrifice his son, it was a tough thing, but a thing that would have made a sort of sense to him. This means that it was true test.
But, like so many things in the Scriptures, it was an event with a deeper purpose, in this case that deeper purpose was the purpose of revealing that the Lord God is a different God, a god who does NOT require human sacrifice. Thus, as the rest of the Old Testament shows us, one of the things that separated the Jewish religion from its Canaanite neighbours was precisely the fact that it did NOT have human sacrifice.

(pause) Let us shift the focus here, and turn to our second reading where this whole thing is turned on its head. Here we are reminded of how “God did not spare His own Son, but gave Him up to benefit us all” (Rom 8:32). Far from God wanting us to sacrifice our sons to Him, He sacrifices Himself to us –the Father and Son in their jointly-willed (for God has only one Will) plan for our salvation. Here we see God’s great generosity to ourselves, His great plan to show us the depth of His love.

(pause again) Generosity in sacrifice is something we need to strive for in Lent. A week and half into Lent and we might already be struggling in our Lenten resolutions, in our faithful to what we have “given up”, in our planned generosity to the poor, in our generosity in prayer in this holy season.
Abraham was tested and shown to be willing to be generous in sacrifice. As a result he was showered with blessings. The blessings of descendents, of land, of “all the nations of the earth blessing themselves by” his descendents.
If we are generous in our Lenten offerings then we too will be showered with blessings.

Finally, we are offered that other reminder of the importance of persevering in the gospel text we heard of the Transfiguration: The vision of future glory given to Peter, James and John to sustain them through the trials that lay ahead when Christ would be crucified.
If we persevere then that same glory will be ours, the glory of sharing in Christ’s Transfiguration, the glory of sharing in His Resurrection.
Which means that, for now, it is worth our staying the steady course through the Lenten desert with our Lord, through the Cross, to Easter glory.
Posted by Fr. Dylan James, Catholic Priest, dual American-British citizen at 00:16