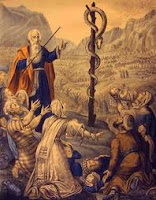 Jn 3:14-21; 2 Chron 36:14-16.19-23
We’re now over 3 weeks into Lent, over half-way, and its possible at this stage to have lost sight of what we’re doing in Lent. Maybe you’re staying faithful to your Lenten resolutions, but struggling in them rather than remembering what they’re aiming at. Maybe you’ve been faithful to what you’ve given up, but just feeling a little miserable about it. And, no doubt, more than a couple of us have broken our resolutions, and are not really sure whether its worth returning to them.

Regardless, today’s reading give us a helpful chance to re-focus on the END that Lent is aiming at. We have set before us the ultimate ‘lifting up’ that Lent aims at, and we have this set before us in slightly different ways in each of our 3 readings. In the Gospel we have the Lord refer, by means of reference to prophetic symbols in the Old Testament, to His coming crucifixion. He looked ahead to His being ‘lifted up’ upon the Cross and compared it to how Moses ‘lifted up’ the miraculous bronze image of the serpent on a pole. All who turned and looked at that image were saved, saved of the poisonous bites they had received. And the Lord Jesus makes the comparison that all those who turn and look on Him, Him ‘lifted up’ upon the Cross, turn to Him with the eyes of faith, “everyone who believes [in Him] may have eternal life in Him”. This being lifted up is what Lent looks towards on Easter Sunday.

There is another thing going on here, however, another thing that we need to remember if we are to understand what Lent is all about. We need to recall why we need ‘lifting up’ at all: Because of our sins. Because our sins mean that we have cast ourselves from God. And in this we join the universal state of all mankind since the dawn of time, the sinful state of all humanity except Our Lord Himself and His Blessed Mother.
There can be a real fear within us, a fear of admitting that we have sinned, that we have cast ourselves from God. Jesus referred to this in the Gospel text we heard when He referred to men preferring “darkness to light... for fear [our] actions should be exposed”.
This very point, this fear of admitting our sins, can be because we have forgotten one of the key things that Lent aims at, namely, being PURIFIED of our sins, being enabled by God’s grace to be changed.

Our first reading from Chronicles gives us a reminder of hope in this regard. It started, somewhat sombrely, with the account of how the Jewish people had turned form the Lord, had “added infidelity to infidelity, copying all the shameful practices of the nations... until at last the WRATH of the Lord rose so high against His people”. And they were punished by being cast into exile.
The point, however, is that that was not the end, rather, it was new beginning. It was a time of purification for them, so that when they were restored to the Promised Land they returned as a purified and better people.
Such PURIFICATION is what Lent seeks. Our prayer, fasting and almsgiving, our ‘giving things up for Lent’, all aim at a purification of our hearts such that the new life of Easter may come forth.
In the midst of the desert it is possible to forget that.
I the midst of the time of exile it is possible to forget the purification it can achieve within us.
In the midst of Lent and being mindful of our struggle with what we have given up we can forget that goal.

So, let me conclude by returning to that image of being ‘lifted up’ in a new angle:
Each and every thing we are doing for Lent needs to be ‘lifted up’ in prayer to God as we do it, ‘lifted up’ to Him as an spiritual sacrifice, lifted up in union with Him who was lifted up upon the Cross,
And if we do that, the ‘new life’ He brings will take root in our hearts.

I’d like to offer a final little thought about mothers.
We keep today, in England, Mothering Sunday. And I know many of you are specially here to be with mothers. And others of you will be thinking today of your mothers, living and departed, even if you can’t be with them.
And let me briefly apply that same imagery mentioned to our mothers:
God purifies and disciplines us to make us better, and mothers, as we know, do the same.
When you are child a mother’s discipline seems tough, and we often don’t see its purpose. But its actually one of the many signs of love shown to us. So as we think of God’s love for us manifested in our Lenten discipline let us also give thanks to God for the discipline our mothers gave us, and thank Him and them, for the many other things they have given us too.
Posted by Fr. Dylan James, Catholic Priest, dual American-British citizen at 00:22