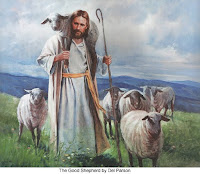 Jn 10:11-18
Back when I was very young, Tina Turner released a song called, “We don’t need another hero”. For many people that song summed up what they felt, even if they wouldn’t have articulated it that clearly –and I think that attitude has become even more common since she sang that back in 1985.
In past ages of history people used to write songs about heroes, books about heroes, used to look for heroes, and believe in heroes –believe that there were actually people better than others, people worthy of looking to for help, worthy of being taken as role models and so forth.
In our age, in contrast, people have become very cynical. People increasingly expect the worst from our politicians, from our institutions like our schools and the police force, from the Church and her priests, and the media continually points out the worst in everything –rarely reporting the best in things.
So, few people now believe in heroes. And the worst way you might dismiss someone is to portray them as someone who thought of himself as a hero, who thought of himself as able to rescue you.

I make this observation because we as Catholics DO believe in a hero, namely the Lord Jesus, who we recall on this Sunday as “The Good Shepherd”. And, He actually had the audacity to portray Himself as a hero –as one WORTHY of rescuing us, as one ABLE to rescue us, and as one worthy of having us LOOK TO Him for help and look to Him as a role model.

As we heard in that gospel text just read, Jesus said of Himself, “I am the Good Shepherd”(Jn 10:11). And He went on to specify WHY we should think of Him as ‘Good’, namely, because He “laid down His life for His sheep”. He further specified that He has the power to be the shepherd we need, proving this by His claim to have “the power to lay down [my life] and take it up again”. He predicted His death and resurrection in advance.
This truth, this person, is the ultimate antidote to the cynicism that grips our modern world –if we recognise Him as the ‘hero’ that He is then we must believe in ‘better’ in many other things too.

However, it is of the very nature of cynicism to refuse to see the good.
And the cynicism in many people is such that they often reject the very notion of there being a ‘good’ God –“I don’t need any Almighty God watching over me!” –I’ve been told more than once!
And, today, there are many people who similarly try to pick holes in the Gospel’s portrayal of Jesus in order to make Him less of the ‘hero’ than He is –because they just don’t believe that anyone can really be that good.
Part of what conversion to Christ involves is putting aside our preconceptions and recognising Him for what He really is and thus Who He really is.
For ourselves, living in this midst of this culture, we need to continually seek to re-open our eyes to the true Christ, not some half-version given us by the media critics. And if we do that, if we recognise the ‘hero’ in Him we also recognise the source of grace to believe in goodness in others too, and even in ourselves –and in this sense the cheesy phrase, ‘finding the hero within’, CAN be possible –not by our own heroics or our own goodness or our own power, but by seeking to let Him be active in us.

Tina Turner may have sung that she didn’t “need another hero”, but she did, and she does.
And so do we all. And the hero we need is one to save us from all that is wrong with us: our sins, our weakness, our failings. And the one bold enough to call Himself “The Good Shepherd” also proved He is good enough and strong enough to be just what we need.
Posted by Fr. Dylan James, Catholic Priest, dual American-British citizen at 00:05