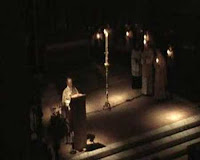 Gen 1:1-2; Gen 22; Exodus 14:15-15:1; Ezek 36:16-28
Each year I’ve focussed my Easter Vigil sermon on a different aspect of what the liturgy of the Vigil tells us.
This year I want to comment on the significance of what might be considered the most basic thing of all about the Vigil: the vigil of readings we have at the beginning of this service, and in particular, to note the significance of the context that that liturgy gives for placing the reading of the Old Testament passages.

Let me remind you of the sequence of events that tonight’s liturgy has passed through:
Outside, we had the lighting of the Paschal (or Easter) Candle at the beginning.
The singing of the Exultet proclaimed the symbolism of it, namely, of Christ’s Paschal event, His death and Resurrection, triumphing over darkness and evil.
Then we had the reading of a series of Old Testament passages. These passages were read in the light of the Pascal Candle. (Only after that were ALL the lights lit and the Gloria sung.)

And, that, very simply was the point: We looked back at the Old Testament in the light of Christ.
That, we need to remember, was also how the first Christians, who were all Jews, who until that time held as their ONLY scriptures what we now call “the Old Testament” scriptures, that was how they then came to look at their Jewish Scriptures:
they looked back and re-read them in the light of Christ.

Let us briefly take 4 examples from our 4 Old Testament readings:
We ended with the promise in Ezekiel, “I will pour clean water over you and I shall give you a new heart”. The first Christians rapidly recognised this as a foreshadowing of Baptism by which the Christian is washed of his sins and receives the Holy Spirit –a new heart.
Before that we had the account of the Exodus, with the Israelites being saved through water, saved through parting of the Red Sea. Again, the first Christians recognised this as something that happened more perfectly in Christ, in Baptism into Christ.
Before that we had the account of Abraham being willing to sacrifice his son Isaac. The first Christians recognised this as a sacrifice that looked ahead to Christ on a great many levels. “The Lord himself will provide the Lamb” –and indeed He did: Christ.
Finally, the vigil of readings started at the very beginning, with the creation account of Genesis. The first Christians saw the work of Christ at the very beginning, as we read in the Prologue of John’s Gospel: “In the beginning was the Word...through Him all things were made”.
In short, while we need to Old Testament in order to recognise Christ, it is also true that there is not one thing in the Old Testament that does not acquire a new depth of meaning when it is seen in the light of Christ the Messiah.

For ourselves, this should remind us that all existence relates to the Christ whose victory over death we recall this night. All OUR existence relates to Him too. As the prayer outside blessing the Paschal candle said, “Christ yesterday and today, the Beginning and the End, the Alpha, and the Omega. All time belongs to Him, and all the ages. To Him be glory and power, through every age and for ever. Amen”
Posted by Fr. Dylan James, Catholic Priest, dual American-British citizen at 21:00