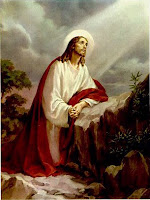 We have a pastoral letter from the Bishop about the coming Week of Prayer for Christian Unity. He's aware that he's written a number of letters (you've had one for each of the past two weeks) so he's said that I don't need to read this one -just make it 'available' to you. So, I have enclosed a copy of it in the newsletter, and, I intend to say a few words on the theme of his letter instead

The Bishop has written to us to draw our attention to the fact that the annual Week of Prayer for Christian Unity will start during this coming week. And he wishes to encourage us to take part in it.

This ‘Week of Prayer for Christian Unity’ is something that has been going on for more than a century. There were, at first, somewhat characteristically of the divided era, a number of conflicting 'unity' weeks organised by different groups on different dates. However, as the movement and hope that there might be a real re-union of the different churches developed a number of things changed, and we now have one united unity week.

As many people have observed, much has changed in the relationship between the different churches over the past century, and also within the churches over that time.
Much of the initial progress seemed hopeful, but more recent decades have noted various seemingly irresolvable differences over ‘truth issues’ that make talk of re-union now seem more distant.

That said, we'd do week to remember the real progress that HAS been made over the past century. A century ago, and in the lifetime of many of our congregation, the relations between Christians of different denominations used to be characterised by mutual ignorance, mutual prejudice, and even sectarian violence in many parts of our country. That this was the case among those who profess to follow the same Christ was scandalous, literally so, in that it was an obstacle to others believing in Christ.

Christ wants His Church to be one, to not be divided. Christ prayed, as He sweated blood in the Agony in the Garden, prayed "that they might be one"(Jn 17:21). I remind you of this simple fact because even when Christian re-union might seem impossible, in reality nothing is impossible to God, and what He seeks we too must seek, work for, and pray for.

What prayers can we then engage in during this unity week?
Let me give three simple suggestions.
First, at home and here in our St Edward's prayers:
A novena, at the end of each weekday Mass. Or, for you to say daily in your homes. The novena I've suggestion on the sheet with the bishop's letter has a different intention each day.
Second, more directly and in a more inter-denominational manner, attendance at the events organised by our town's ecumenical body, 'Churches Together in Shaftesbury'.
Let me particularly commend the opening and closing services. The closing service is here at St Edward's. The opening service is at the Society of Friends, the Quakers, and for many of you might be, apart from anything else, an interesting exposure to a different sort of thing, with their prolonged silence -something that we commend in Catholicism, but don't always practice as we could.

To conclude, please read what the bishop says about the importance of praying for Christian Unity. And please DO pray for it. The text of the Bishop's letter will be available online at the Plymouth Diocese website.


Please join in the worldwide prayers for unity this week by making this short novena, praying for the different daily intentions below. This novena prayer will be said after all Masses this week:

Daily Novena Prayer:
Lord Jesus Christ, You called Your Church into being, founded her on the rock of Peter's faith, and prayed that she might be one. Look down upon Your Church today as she stands buffeted by the storms of an unbelieving world and distressed within by the weakness of sin and division. As You prayed for her once as You sweated blood in Your Agony, pray for her now from Your position of power at the right hand of the Father. Send down Your Holy Spirit to heal her divisions, confirm her in that Truth which You are, and to restore her to that unity which once she knew. We ask this of You who live and reign with the Father and the Holy Spirit, One God for ever and ever. Amen.
Followed by: Our Father. Hail Mary. Glory Be.

Services During the Week:
(1) Opening Service: 7.30pm Fri 18th January, at the Society of Friends (Quakers), by the Hospital

(3) Sunday 20th January: 10.15am, at “Father’s House”(formerly the ‘Shaftesbury Christian Centre’).
Note, however, that Catholics attending this service will still need to attend a Sunday Mass on either Saturday evening (5pm St Edward’s) or Sunday evening (6pm Marnhull). For this reason our Catholic Directory on Ecumenism notes, “Since the celebration of the Eucharist on the Lord's Day [Sunday] is the foundation and centre of the whole liturgical year, Catholics are obliged to attend Mass on that day and on days of precept. It is not advisable therefore to organize ecumenical services on Sundays, and it must be remembered that even when Catholics participate in ecumenical services or in services of other Churches and ecclesial Communities, the obligation of participating at Mass on these days remains.”(n.115)