Papal Motto and the Divine Mercy, 2nd Sunday of Easter 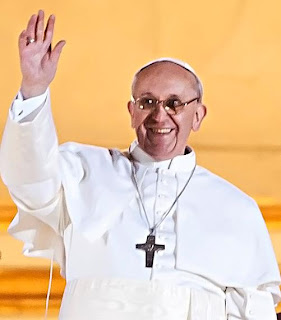 Jn 20:19-31; Acts 5:12-16
Today we keep what is called “Divine Mercy Sunday”, and I’d like to share a thought about that mercy by drawing on some words of our new Pope Francis. In particular, by thinking of how the Lord LOOKS at us with mercy, because this is the motto of our new Pope.

The new Pope’s motto is “Miserando Atque Eligendo”, the same motto he had as a cardinal. And when it was first announced lots of people attempted to translate that motto as something like, “lowly and chosen”. However, the meaning actually derives from the original context of these words, which are taken from a homily by one of our great English saints, the Venerable Saint Bede, regarding the calling of St. Matthew by Jesus. In the homily St Bede describes how it was that the Lord chose Matthew. The Lord did not look at him and despise him as tax collector, or look at him with anger as a sinner. No. As St Bede says, the Lord "saw the tax collector and, because he saw him through the eyes of mercy and chose him, he said to him: 'Follow me.'”
This is how the Lord looks at us, with “eyes of mercy”, and so He chooses us, chooses and calls us to follow Him.
[The Vatican website states: “The motto of His Holiness Francis is taken from a passage of the venerable Bede (Homily 22 on the Feast of Matthew) which reads: ‘Vidit ergo Jesus publicanum, et quia miserando atque eligendo vidit, ait illi, ‘Sequere me’.’ [Jesus therefore sees the tax collector, and since he sees by having mercy and by choosing, he says to him, 'follow me'.]”
or the Catholic News Agency translates the motto as “because he saw him through the eyes of mercy and chose him"]

Pope Francis had a personal experience of this at the tender age of 17. As a Vatican statement as revealed, “Following confession, he [the young future pope] felt his heart touched and he sensed the descent of the Mercy of God, who with a gaze of tender love, called him to religious life”.
Our new Pope, as we all already know, has manifested a life of consistent concern for the poor and outcast, and in his sermon two weeks ago [Palm Sunday] he gave us an insight into how this care for the poor seems to be connected with LOOKING at people with the eyes of God, the “eyes of mercy”. He made a contrast and noted that “in the eyes of the world” there are many “who do not matter”, especially “the humble, the poor, the forgotten”. But, when Jesus came and walked among men, those who were lowly felt great “hope” because they sensed that He looked at them with different “eyes”. “He [Jesus] understands human sufferings, he has shown the face of God’s mercy, he has bent down to heal body and soul. ….This is the heart that looks on all of us, watching our illnesses, our sins.”

So, He looks on us and sees “our sins” and “our illness” and our need. And though the “eyes of the world” reject such, He looks with “the eyes of mercy”. And looking at us with such He does not just leave us, but chooses us, calls us to something more.
Today’s Gospel text for this Divine Mercy Sunday is always the text in which we hear Jesus entrust the mission of mercy and forgiveness in the sacrament of confession to the Twelve Apostles, “those whose sins you forgive they are forgiven…”(Jn 20:23). As I said, the young man who has now become Pope experienced the “eyes of mercy” himself after going to confession. Many of us will have had similar experiences of realising how mercifully God looks at us, and had that experience in this same sacrament of mercy.

But, to conclude, there is something that follows: if we have accepted that the Lord has looked at us with “eyes of mercy” then we too need to look at others with such “eyes”. The people we heard about in our first reading hoped that “the shadow of Peter” (Act 12:15) would fall upon them. The merciful shadow of our new Pope, St Peter’s successor, seems destined to fall on those poor and destitute, and to call us to do the same. Showing mercy to others because we have experienced it ourselves.
Posted by Fr. Dylan James, Catholic Priest, dual American-British citizen at 00:05