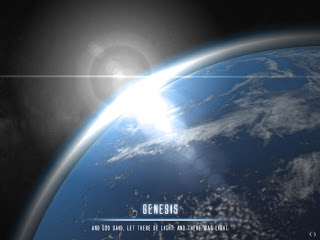 Gen 1:1-2:2
Tonight, in the office of readings, we have just heard some of the most famous and most important passages of the entire Scriptures. We have heard, among other things, of how God created the world, of the sacrifice of Isaac, and of the parting of the Red Sea. The importance of the creation account, the assertion in it that we do not stand here as products of chance, but as the result of the creation from nothing by an all-powerful God - the importance of knowing and understanding this truth is hopefully obvious to all of us. However, what might be less obvious is why we are hearing of it tonight, at the Easter vigil. And it’s on that point that I would like to say a few words at this year’s vigil.

The structure of tonight’s liturgy is very deliberate. We had the lighting of the Easter candle as a symbol of Christ’s resurrection triumphing over the darkness of death. And then, and this is a pivotal point, it is only then, IN THE LIGHT OF CHRIST, that we read the Scriptures. In a sense we are re-reading in the light of Christ. Looking at those old texts, again, in the light of Christ.

In the context of the creation account, what this means is that we are realising that the all-powerful Christ who rose from the dead is the same Lord and God who was there at the beginning of the creation. And conversely, it is the one all-powerful Christ, who was the Eternal Word “through whom all things were made”(Jn 1;3), it is the same Christ who was working in creation who has worked the re-creation of fallen humanity that has been achieved in His glorious passion, death, and resurrection.
Tonight is not about the Fall of man, and so we do not have the account of the Original Sin.
Tonight is about the restoration, the re-creation of fallen man.

“God said, ‘Let there be light’, and there was light”(Gen 1:3).
“God said, ‘Let the earth produce vegetation’, … ‘Let the waters teams with living creatures’ … ‘Let the earth produce every kind of living creature’, and so it was”(Gen 1:11; 20; 24).
After the Fall of mankind in sin there was darkness.
But the same God who made light and life re-created, restored, triumphantly, the light of Christ, “a light the darkness could not overpower”(Jn 1:5), the light that is Him who said that He was the “life”(Jn 14:6) itself and “the light of the world”(Jn 8:12).

We live, ourselves, both Fallen and Redeemed. We still experience in ourselves the weakness of the Flesh. But, we can also experience, and we DO also experience, the triumph of grace, the triumph of Him who is “the resurrection and the life”(Jn 11:25) within us.
The Resurrection is not some random event of power that happened once long ago, with no connection to what went before it, and no connection to what happens now.
On the contrary, the resurrection was the definitive work of re-creation that restored what had once been created and made available to us, today, the continual re-creation of each one of us as often as we turn to call on His grace.
And that is what we celebrate in reading the text of the creation in the light of Easter candle, in the light of the resurrected Christ.
Though once there was darkness, “God said, ‘Let there be light’, and there was light.”(Gen 1:3)
Posted by Fr. Dylan James, Catholic Priest, dual American-British citizen at 19:30