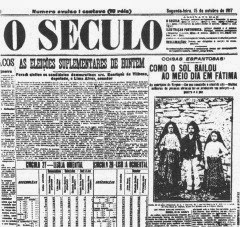 2 Kgs 5:14-17; Lk 17:11-19
People often wonder if God still does anything, still works miracles, is still active in people's lives.
We read in the Bible of Him doing great things. So, for example, our first reading described the healing of the leper Naaman by the prophet Elisha. While our Gospel text described the healing of ten lepers.
But, is the Lord unable or unwilling to work His power in OUR age as He did in the past?
To phrase this Scripturally, because it actually an old question that gets asked in pretty much every age, "Is the arm of the Lord shortened?" (Isa 59:1; Num 11:23). Does He not reach as far as He used to?

Today, Pope Francis is doing something that should remind us of the power of God still today. As you've no doubt heard me say repeatedly by now, today the Pope is consecrating the entire world to the Immaculate Heart of Mary, before the statue of our Lady of Fatima, a statue he's had specially brought to Rome from the sanctuary in Portugal. You may recall, too, that just after he was elected Pope, he had his papacy dedicated to Our Lady of Fatima by the bishop there.
But what is Fatima all about, and why should it matter to us?
Fatima is one of those many places where God has manifested His power in a mighty fashion, and here, as in similarly many occasions, here He manifested that power through the hand of our Blessed Mother & His.

In the year 1917 three shepherd children, Lucia, Jacinta, and Francesco, aged 10, 9, and 8, in the remote village of Fatima in Portugal claimed to have seen a vision of Our Lady. For a long time their families called them liars, the parish priest doubted them, the local mayor (in a violently anti-Catholic government) arrested them and threatened to boil them in oil unless they denied it. But on the 13th day of six consecutive months ever-increasing crowds came to see the children as they had their visions. The apparition promised that on the 13th of October, the anniversary of which is today, a miracle would be worked in public. 70,000 people came that day, most believers, but many came to scoff, and secular journalists came to report what they presumed would be a disappointed crowd. Yet, it is those journalists who give us some of most dramatic accounts of what they all saw, 'the miracle of the sun', which is described in more detail in the parish newsletter, and even more detail at www.fatima.co.uk Some people today have tried to claim this was just a mass-hallucination, yet never in human history has there been such a well-documented miracle, and never have such a mixture of unbelievers and believers had the same "hallucination".

To me, however, the real miracle of Fatima was not the sun, or the healings of the sick and crippled, but the prophecies that Our Lady gave, prophecies of the horrors that would be unleashed on the world during the 20th Century. We think of the two world wars. But we are less likely to be aware of the 27 million Christians martyrs killed last century, more than twice the number in all the previous 19 centuries put together, whose accounts Blessed John Paul II documented at the end of that century (see online link to Vatican website). All that human and Christian suffering was foretold in those visions at Fatima.
But, and this is the point, it was not foretold in some passive unavoidable way, but as a warning, with a remedy that, if followed, could have prevented much if not all of it. That remedy was prayer (especially daily Rosary), penance, and to entrust ourselves to her Immaculate Heart. That remedy was followed by many, and Pope John Paul II, as indicated in the parish newsletter insert, attributed his being spared in the assassination attempt of 1981, to Our Lady. Her hand guided the bullet and spared his life, he said.
And the point is this, as Cardinal Ratzinger is quoted in the newsletter saying: prayer changes the course of history.
And it can change the course of my life, and your life.
If we entrust ourselves to our heavenly Mother, and entrust and consecrate our suffering world to her Immaculate Heart, in union with the consecration the Pope in making on our behalf this very day.

"Is the arm of the Lord shortened?" No.
Yes, we have difficulties. Yes, we have fears.
But if we bring those to her, she will not let us down.
"Be not afraid", said Pope John Paul II as his repeated refrain, citing the words of our Lord when He had Risen and had shown His power over death itself.
And when we come to her, we have one who can save us from whatever would make us fear without her.