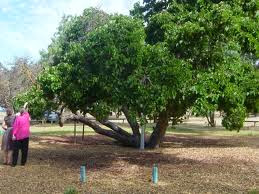 Lk 17:5-19; 2 Tim 1:6-8.13-14
There are many things I don’t know about you, this congregation, but there is one thing I am certain about: none of you has ever said to a mulberry tree: “Be uprooted and planted in the sea”(Lk 17:6) and had it obey you.
Now, rather than let that discourage you, discourage you because you just heard the Lord Jesus referring to doing just that, let me remind you of what I pointed out three years ago when commenting on this text:
http://fatherdylanjames.blogspot.co.uk/2010/10/3rd-october-2010-27th-sunday-in.html
None of the saints down the ages have ever done this, none of the apostles ever did this, and not even Jesus did this.

The Lord Jesus is speaking about the ability of faith to achieve great things. He says this in a particular context, however, and His apostles are asking for an ‘increase’ in faith in this particular context: the context (not read to us today, but in the preceding verses), the context of difficulty of forgiving. Jesus had just taught His disciples that they must each forgive their brother not just once but seven times a day: as often as he turns to you repentant asking your forgiveness.
And I know there are times in my life when I would rather cast mulberry trees into the sea than forgive someone who has wronged me in the very same away as he has kept doing before.
This is a GREAT thing to do, and yet, in another sense, Jesus seems to be referring to it just a necessary thing to do, “we are merely servants: we have done no more than our duty”(Lk 17:19).

There are many things that can be a struggle, a mighty thing to do in fulfilling the basic requirements of being good. Sometimes just responding to the alarm clock to give God yet another day can seem like a MIGHTY deed (giving Him the ‘day’ isn’t half as difficult as just giving Him the first minute!).

To come back to the apostles’ request, their request in what would seem to the face of a difficult challenge, what did they ask for? An increase in love? In hope? No. interestingly, they asked for faith: “Increase our faith”(Lk 17:5).
Often, it is my lack of Christian faith that makes it hard for me to love, hard to do good, hard to be patient.
For example, when the Faith reminds me that this difficult person in front of me is made in God’s image, that God loves him, that even if he is a sinner he a sinner LIKE ME, when the Faith reminds me of such things I am enabled to do good in a way that I struggle to when I lose sight of what the Faith shows me.

Pope Francis, in his first encyclical earlier this year, on 'The Light of Faith', speaks about how faith changes how we look at the world. He speaks about how 'the eyes of faith' (Pope Francis, The Light of Faith (2013), nn.30; 60) change how we see things. But he speaks also of the lack of faith in our modern society, about how people have lost the sense that God is present, and active, and doing things in their lives. That's why I'm having a series of talks this Autumn reminding us of the reverse, of how God is present. And this Wednesday’s talk will focus on how He speaks to us.

Much of the time we look out on the world, and we look out on people, and we fail to see it as God see it, and fail to love it as God loves it. If our Faith is stronger, if we see the world as God has shown it to us in Scripture and in His own dear Son, then we are empowered to relate to it differently. So, to use that phrase in our second reading, we need to “fan into a flame” (2 Tim 1:6) that gift of faith we each have. Some of us think we have pretty strong faith, some of us feel that it is weak, but faith is a response to what God has shown us, and if we are here at all we are responding, and so we must have some little bit of faith at least.
So, whatever we’re struggling to do, let’s ask to see the world as God sees it, as He’s shown it, and ask Him, “Lord, increase our faith!”
Posted by Fr. Dylan James, Catholic Priest, dual American-British citizen at 00:05