Candlemas, The Presentation of the Lord, Shaftesbury 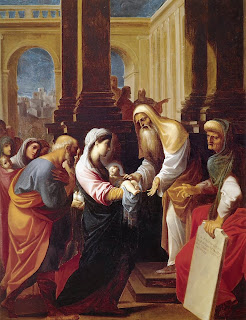 Mal 3:1-4; Lk 2:22-40
Today we keep a simple but beautiful feast. A feast, however, that isn’t really about what it first appears to be about, and isn’t really about what it is titled. Popularly called ‘Candlemas’ because of the use of candles it is more properly titled, ‘The Feast of the Presentation of the Lord’. BUT that isn’t really what the feast is about.
The Lord was presented in the Temple, and, in keeping with the Old Testament law, Our Lady and St Joseph paid the “redemption of the firstborn” (Lev 12, Ex 13:12-15), sacrificing "a pair of turtledoves, or two young pigeons”(Lev 12:8). Our Lord, however, was sinless, did not need to be ‘redeemed’ –so this wasn’t what it was all about. (Summa Theologica III q37 a3)
Our Lady, likewise, completed the Jewish ritual purification after childbirth, even though she too had no needed to be ‘purified’ (ST III q37 a4).

So what was it all about? The words the liturgy had me address to you in the opening greeting put it simply and clearly: “Outwardly He was fulfilling the Law, but IN REALITY He was coming to meet His believing people”.
Our first reading alluded to this with the prophecy from Malachi about how “the Lord you are seeking will suddenly enter His Temple”(Mal 3:1).
The Jewish people were waiting or the Lord. Simeon was waiting there in the Temple for the Lord -and He came.

When we read the Scriptures we find this as a continual pattern: the Lord fulfils the longing for Him that He places in His people’s hearts:
His people were waiting for Him in slavery in Egypt, and as He said when He appeared to Moses in the burning bush: “I have heard the cry of my people”(Ex 3:9). And with a mighty hand He led them out of slavery.
Many centuries later we read how His people were waiting for Him again when their sins had led them into captivity in Babylon. They again cried out to Him, and He again led them out, and restored them in the Promised Land.
Then, later still, as they waited under the oppression of the Romans, they yearned for the fulfilling of the prophecy of Isaiah, that “a virgin will conceive and bear a Son” (Isa 7:14) who would rescue His people.
And, again faithful to His promises, in fulfillment of the longing and needs of His people, He came:
The "people who lived in darkness" and "in the shadow of death" (Mt 4:16) waited, waited for the promise to be fulfilled. And He came, “He visited His people and redeemed them”(Lk 1:68). Light came in their darkness.

For us, too, the Lord will come and does come: in grace, with His healing, in prayer, and especially here in the Mass, in the temple of the New Covenant.
If we want Him to come, we simply need to be patient and steadfast in waiting like Simeon, like Anna. He was faithful to His promises of old; He is still faithful today.

What a lovely sermon full of hope. Thanx.