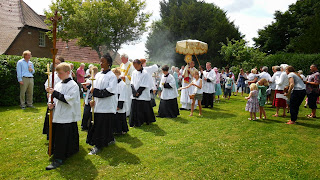 Dt 8:2-3,14-16; Jn 6:51-58
This year, for the feast of Corpus Christi, I'd like to preach about the significance of the petition, "our daily bread" that we make in the Our Father. The early Church Fathers were unanimous in understanding this petition, "Give us this day our daily bread", as a reference to the Eucharist -so it's a profound text to meditation on for today's feast.

Pope Benedict, in his first volume of his Jesus of Nazareth (pp.150-157) trilogy writes about how there are multiple levels in this petition. We can think, first of all, about it as a simple prayer asking for our MATERIAL needs, symbolised in a petition for the request for the basic form of our most basic necessity: bread, as food.
When we read the Gospels it is clear that The Lord cares about our bodily needs: He fed the hungry crowds that came to Him, twice fed them miraculously with a multiplication of loaves. Further, He tells us to pray for our needs: "ask and it will be given to you"(Mt 7:7). 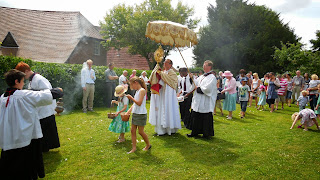 But let us note that the petition says, "DAILY bread" -we are not told to pray that we be given so much that we no longer feel the need of God, that we no longer bother to pray to Him tomorrow. Rather, we are told to pray for what we need for today. This is part of on-going trust in God. Our first reading reminded us of how the Israelites were fed by God with Manna in the desert, the miraculous bread that came down from heaven at night. HOWEVER the Israelites were told to only gather as much bread as they needed for that day (Ex 16:16-22), they were to trust that God would provide bread for the next day when that day came.
Similarly, we are to pray for our material needs, but with on-going trust in the providing of The Lord, even when He provides through tough times, like the Israelites experienced in the desert.

But what of the even deeper, EUCHARISTIC meaning of this petition?
The ancient writer Origen (3rd century) noted that the Greek word we translate in English as 'daily' is 'epiousios', which doesn't appear anywhere else in Greek literature - it seems to be a word coined just for this prayer (Benedict, ibid, p.153).
Modern scholars have suggested it should be more strictly translated as something like, "our bread of tomorrow". What does that mean? It means that we are asking for more than just a bodily, material sustenance, we are asking to be fed with the food of the future life, the HEAVENLY banquet. And the true manna of God, as we heard The Lord Jesus asserting in today's Gospel, is nothing less than Himself. In heaven, He will satisfy us directly with Himself. We pray to be given that future bread, today, meaning that we are praying for an anticipation of that future Divine satisfaction, an anticipation that we might be granted NOW.
And we need that because "man does not live on bread alone"(Dt 8:3) -as we heard in our first reading. We need more than just an earthly 'bread'. 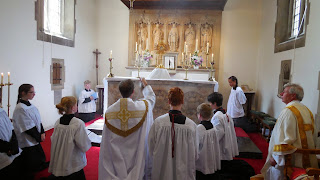 To pray to be granted a taste of heaven while we are still on earth is a presumptuous and impertinent prayer -or it would be, if it was not for the fact that this is exactly what the Lord has promised to give us.
He is "the living Bread" (Jn 6:51), He is the flesh that feeds the world, this is what He gives us in the Eucharist.
AND, think about this for a moment: this is WHY the Church down the centuries has prayed this prayer, the 'Our Father', just before receiving Him in Holy Communion. We don't pray it at the beginning of Mass, or at the end, but before Holy Communion. We pray that we might receive this "bread of tomorrow" that He has promised to give.

Today, at the end of Mass, we will expose for Adoration this "Bread" that is no longer "bread", we will adore Him who is present before us. We will be blessed by Him in the Benediction. Blessed by Him who is "our daily Bread".
Posted by Fr. Dylan James, Catholic Priest, dual American-British citizen at 08:46