listen to ‘Harvest, 23rd Sunday in Ordinary Time, Year A’ on Audioboo 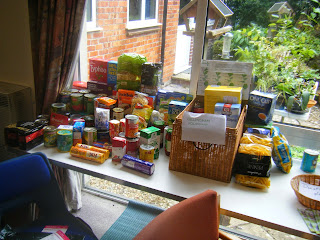 Rom 13:8-10; Ezekiel 33:7-9
Today we keep our annual harvest festival, when we give thanks to God for the good things He gives us, and we bring symbols of the first-fruits of the harvest here to church.

This year, for our harvest thoughts, I'd like to draw our attention to a teaching from Pope Francis about how we MIS-USE the harvest, how we WASTE food -words that he particularly addresses to us in the rich affluent West.
As you are hopefully aware, Pope Francis has repeatedly condemned what he refers to as our "throw-away" culture (Message for World Food Day, 16th October 2013), noting the way that in the West we dispose of things very freely:
“This scrap culture has also made us insensitive to waste, including food waste, which is even more reprehensible when in every part of the world, unfortunately, many people and families are suffering from hunger and malnutrition. Once our grandparents were very careful not to throw away any leftover food. [but] Consumerism has led us to become accustomed to the superfluous and the daily waste of food, which we are sometimes no longer able to value correctly, as its value goes far beyond mere economic parameters. Note well, though, that the food we throw away is as if we had stolen it from the table of the poor or the hungry!" (Pope Francis, World Environment Day, 5th June 2013)

Pope Francis is saying this, in part, because he is from Latin America, because he has lived amidst poverty levels that most of us can't really comprehend. And it seems to be God's gift to the Church at this moment in time that those of us in the West are being harangued by this non-Western pope.
But, he is also saying this in continuity with others popes and as part of the duty of every pope to live out what we heard in our first reading, from Ezekiel. About how the shepherd of the people is to be a guard against evil, a "sentry" denouncing wickedness -in the hope that the wicked man might turn from his evil ways and live.

So, How are we to respond to what the Pope is saying?
Well, part of the antidote to living a "throw away" lifestyle is to instead buy things with the intention of GIVING many things away. So it's suitable that we accompany our harvest thanksgiving by giving to others, as we do each year. This year our collection will go to support those suffering in Gaza. Pope Francis has been saying a lot over the summer to draw our attention to the suffering of those in Gaza and Iraq, and especially to draw the attention of the world to the plight of Christians per se in those countries -who have suffered particular neglect, and we have a particular duty to remember them, for they are our brothers and sisters in the Faith.
We had a collection for Iraq a few weeks ago, and so today's will be for Gaza, and there are envelopes for that on your pews.
In doing this we are, at least in part, living out what we heard St. Paul speak about in our second reading, about how love fulfils every one of the commands.

But to close by returning, more directly, to the Pope's point about "wasting" food. I know, for myself, that it seems that the moment when the food is "wasted" is when I have done the BUYING, when I have bought more than I actually need -once it is home in the fridge it's too late: STUFFING myself in gluttony to avoid it rotting just adds one sin to another, it is to miss the point -I had bought more than was appropriate.
The way to avoid this, Pope Francis is saying, is to "value correctly" the food to begin with: to value it not merely economically but with respect to the poor, with respect to other humans. And, most fundamentally, to value it with respect to God -the source of all good things. The antidote to the "throw away" culture is to treasure and value things more because I see them all as coming form His hand. And so, giving thanks as we do today, is an important way to combat within ourselves the "throw away" culture the Pope is talking about.
Posted by Fr. Dylan James, Catholic Priest, dual American-British citizen at 00:05