The Holy Name, 26th Sunday in Ordinary Time, Year A

listen to ‘The Holy Name, 26th Sunday in Ordinary Time, Year A, Audio’ on audioBoom

The IHS Christogram pictured below is a monogram of the Holy Name, derived from the first three letters of the Greek word for Jesus ΙΗΣΟΥΣ, which is often also taken as an abbreviation of: Iesus Hominum Salvator, Jesus Saviour of Humanity 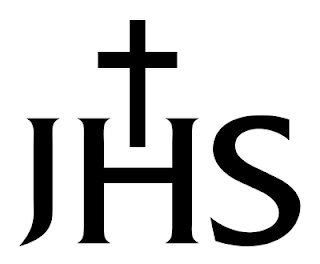 In our second reading we just heard three references to the significance of the "name" of Jesus (Phil 2:1-11). To us here in this parish that should mean something, because our parish is dedicated to 'The Most Holy Name'.
People in the town tend to refer to us simply as "St Edward's", but our full name is "The Most Holy Name and St Edward, King and Martyr", and this designation is one we are very fortunate to have, indicating the name of God Himself.

Names are things that we hold dear to us. Recently I noticed my mother getting my name wrong and calling me by my young nephew's name -annoying! Even worse was when she called my nephew by MY name -all the more galling because she only seemed to do it when he was misbehaving!
I don't like it because getting my name right is about relating to me as ME, not just as a random person. But with respect to God, and HIS name, I think there is an even greater significance for us today:

For us living in the 21st Century there it is the commonly, but mistakenly, held opinion of the people of our day that it is not possible to know God. They say, "maybe there is a god, and maybe not, but even if there is a god you certainly can't know him". In contrast, we claim, as Catholics, that it IS possible to know God - to know Him because He has revealed Himself to us, and a pivotal sign of this fact is that He has revealed His name: "Jesus".

Sacred Scripture holds that the name of God is of great significance. In the Old Testament the ineffable name of God was first revealed as YHWH [which has no vowels, but is sometimes written in English as 'Yahweh'], “I am who am” (Ex 3:14). Out of reverence for the holy name it was never pronounced. Instead of pronouncing this name, the Jews said, “Adonai”, i.e. “The Lord”. Today, still, in the Catholic liturgy we never say the word YHWH but our Bible translations instead say ‘The Lord’. This unpronounceable aspect of the Divine Name indicates something about the Divine: He is beyond our ability to grasp, He can only be known at all because He REVEALED Himself to us.

And, in the FULLNESS of time, in the New Testament, God FULLY revealed Himself In HiS Son.
We might note further that the New Testament name by which God chose to fully reveal Himself, ‘Jesus’, is a name that incorporated the Old Testament name: 'Jesus' is a name that means ‘YHWH is salvation’. This meaning of ‘Saviour’ (indicated in Mt 1:21 and Lk 2:21) indicates what Jesus is TO US: the one who can save us from all that troubles us, from evil, from suffering, from sin. The name also signifies that there is no-one else who can save us, only Him, because only He is God. “There is salvation in no one else, for there is no other name under heaven given among men by which we must be saved” (Acts 4:12). “All who call upon the name of the Lord shall be saved” (Joel 2:32).

To bring this to a conclusion: you might think that a name isn't very important. After all, in the play Romeo and Juliet, Shakespeare famously claimed that it was not: “What's in a name? That which we call a rose by any other name would smell as sweet” (Romeo and Juliet - Act II Sc 2). However, the significance that Scripture attaches to the name of God indicates that we need to differ with Shakespeare. The fact is, that if you don't know the name of a rose it might still smell as sweet, but the that you didn't know it's name would indicate that you didn't really know much about it. More relevantly, thinking of persons, if Romeo did not know the name of Juliet it would indicate that he did not really know her, and he could not love her without knowing her. It would be meaningless to speak of loving someone if we did not know them well enough to know their name.
Why is this relevant? Well, because we know the name of God. He is the one "who is" and is the one who "saves". And we know it because He has told us His name when He told us about Himself. And knowing Him we can love Him, love Him who first loved us.
And all of that is encapsulated in the precious title of our church: "The Most Holy Name", Jesus.